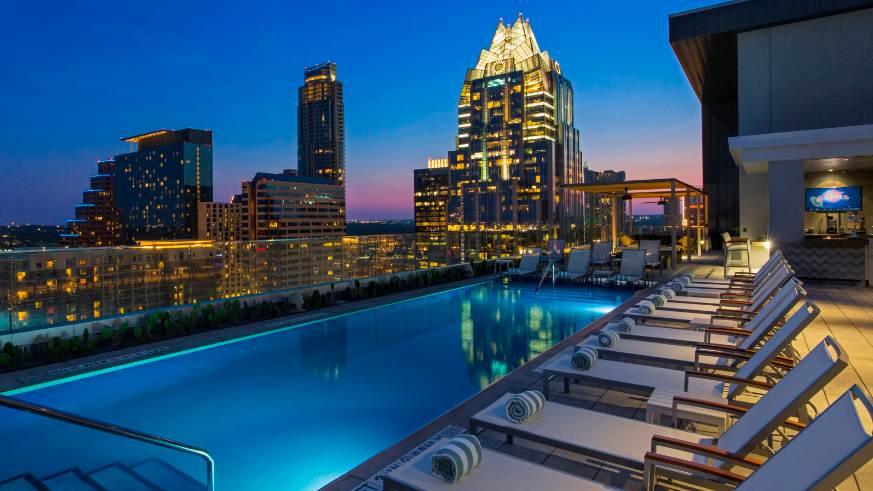 Austin which is the capital of Texas is an inland city that borders the Hill Country region. It is where do University of Texas flagship campus is located and is popularly known for its live music scene that majorly focuses on blues and rock.
Most parks or lakes in Austin are known for biking, hiking, swimming, and boating. In southern Austin, it has a formula 1 raceway as previously hosted the United States Grand Prix. Austin is said to have a population of over 900,000 residents.
Tourists love Austin because of its music events, Good food, and weirdness. Due to the welcoming locals and amazing culture that the residents process it is now among one of the most popular places to live or visit in the United States. The crime rate in Austin Texas is lower than average and the City is not to be one of the safest in the United States. Austin Texas is known as one of the best places to live in the United States of America and has been voted three consecutive years for it due to the job market, quality of life there, and the desirability of the city.

However, most people don’t stay in Austin for a long time due to the high housing costs. the rent in this city is much more expensive than other Texas cities like San Antonio, Houston, and Dallas fort Worth. This post will help you find luxury stay in Austin 2022.

The hassle by everyone to visit Austin Texas is very crazy especially when people come around for events like SXSW which is held on a yearly basis. So if you are about to visit Austin real soon header for a weekend visit or for a landmark this guide will help you know the best hotels you can easily stay in Austin. In this post, you’ll also get to see the best hotels in Austin downtown 2022. 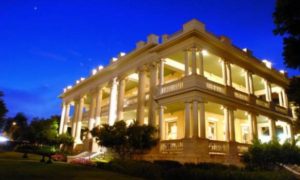 History runs deep inside this luxury hotel, set in a renovated manor house dating back to 1900. The mansion in the white Greek revival style has towering carved columns, a wide exterior staircase, and a wrap-around veranda — but inside it’s completely modern, with contemporary artwork lining the walls, and furniture in a chic palette of grays and navies. The range of mini-bars is particularly of the moment, taking influence from the hotel’s Austin locale: Deep Eddy Vodka, High Brew iced coffee bottles, Republic of Texas tequila, and Austin Beerworks beers can be found in it. The Ella is really close to the UT campus but you’ll have to rent a car or rely on ride shares for something else. 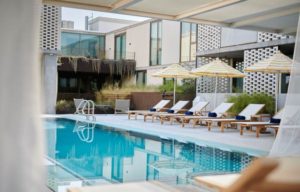 Set in a low-slung, white-brick structure, this compound-like hotel occupies a whole block in Austin ‘s trendy South Congress neighborhood — and draws into its orbit all the artfully tattooed creatives of the city. The spacious lobby is divided into many semi-private seating areas, but the vibrant bar – filled with new furnishings from the middle of the century – is where you want to sleep from morning to night. Rooms are stylishly sleek, with polished cement walls, hardwood floors, and a palette of dark turquoise and gray colors. In this mini-compound, the facilities of the hotel are so welcoming you might spend your entire stay. There is a well-edited women ‘s apparel boutique, Sunroom, and six restaurants and bars, including high-end cocktail omakase, Watertrade experience. 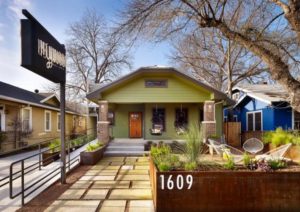 This 1920s Craftsman bungalow, with its welcoming modern porch and wide hanging basketball chairs, looks more like someone’s home than a hotel — and that’s deliberate. The husband-and-wife owners and a couple of other team members are both passionate about the local East Austin area, and will also take time to help you make your trip on a regular itinerary. Even the rooms are as comfortable as the ones you would find at a friends’ home, with so famous Stearns & Foster beds, the front desk has a price sheet and ordering details. Even the mini-bars here are especially noteworthy for pricing their bargain (by mini-bar standards). This is one of the cheap hotels in Austin, tx. 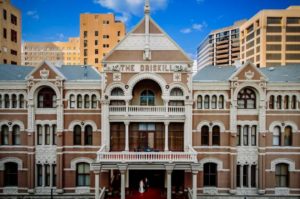 No more authentically Texan hotel exists near downtown than this grand dame of the 1880s. The Driskill is freshly modernized in addition to its classic calcareous and brick façade, with light, colorful guest rooms, while the decor pays tribute to the hotel’s role in Texas history; For example, the iron bed headboard features Texas stars and the letter “D” which is reminiscent of a cattle iron brand. (Mr. Driskill was a livestock baron.) Room service is available 24/7 — so you’ll want to use it. The hotel is known for its Chocolate Cake of 1886, named for the year it was constructed. 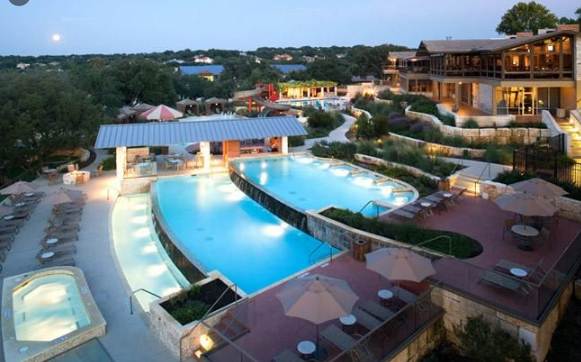 Set on a picturesque hillside of its namesake lake, this all-inclusive spa resort draws relaxation seekers from all over the place — in reality, you’ll see them all buffed and polished from their treatments, strolling the grounds in their robes during the day. Beds are incredibly luxurious, with a down comforter to curl up to, and the resort’s own line of lavender-scented items for the bathroom; the same ones used in spa treatments. Having regard to the spa uses goods cultivated on the farm (wildflower and organic honey are used in the facial scrubs). There is no way you can feel comfortable here.

READ THIS: Top 10 best cities to live in the USA 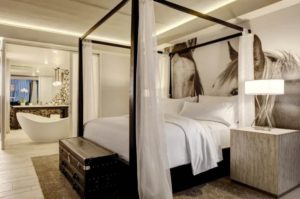 The Domain, the mixed-use development where the Archer is located, is situated in a suburban community in north Austin, about 20 minutes (without traffic) from the city. While it’s crowded with high-end shops and restaurants, the quiet area provides a break from the tourist crushes in downtown Austin, hipster-fied. And the visitors know that: This attracts young people who want to visit a boutique hotel, away from the crowds and live music at night. Rooms are spacious and modest, most with a single accent wall; but where this hotel shines is the bathroom. 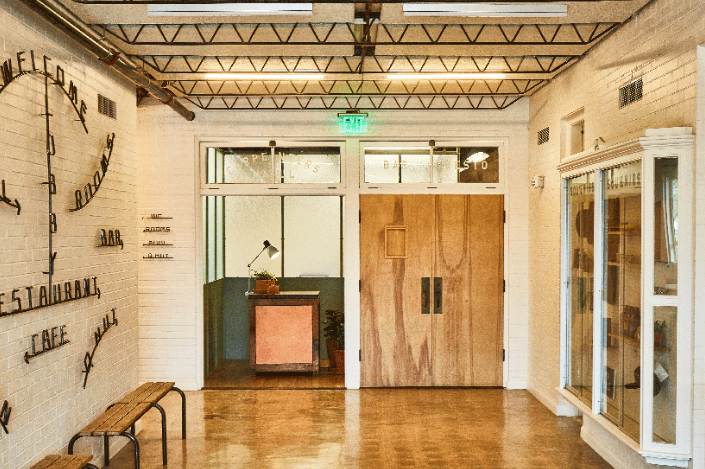 Carpenter seems completely unassuming from outside. The one-story brick house, once a carpenter ‘s union hall, has been in Austin for decades and looks almost unfinished — such as a (hip) high school — with wooden floors and austere walls, along with local notices posted on bulletin boards. The hotel is a new project of Mighty Union, a small hospitality business based in Portland and co-founded by Jack Barron of Ace Hotels. The food and drinks are behind Andrew Knowlton, a former Bon Appétit writer, and his friend, Christina, an opening partner at Aska in New York City. There is no room service, and the coffee bar looks like Portland meets Brooklyn meets the East Side of Austin — but it’s a chic, cost-conscious choice just a stone’s throw from Zilker Park. 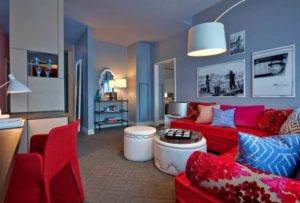 This trendy hotel, attached to the famous Moody Theatre, where live concerts are filmed for Austin City Limits, feels certainly suited for Austin. It also seems to be located near some of the best restaurants and shops in town (guests stay here for walkability to downtown and nightlife access) So, throughout the week, you’ll find a combination of trendy young professionals and the weekend musicians/concert-goers. Drop by the Records Room if you have time for a pre-dinner drink; it’s one of the cozy bars, but the vinyl fireplace and floor-to-ceiling shelves are pretty awesome. This is one of the 5 star hotels in downtown austin, texas 2022. 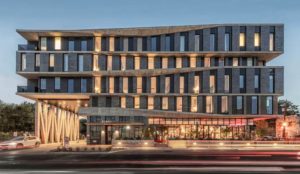 ARRIVE is in East Austin, right in front of Whisler ‘s storied restaurant. The aging Goodwill warehouse that used to hold the address of ARRIVE was torn down, while the warehouse next door, hundred years old, became Lefty’s Brick Bar. Concrete columns, black metal, and boho woven lanterns give the hotel an atmosphere of an industrial-meets-boho. There is no reception desk (and workers are only accessible by text) so visitors check-in at the bar and get a free snack and drink plus a detailed guide on what to do during their stay in Austin. The rooms are packed with Apple TVs, Hiatus robes, Bluetooth Marshall speakers, and Brooklinen bedding to match your regular millennial guest with a wealth of USB ports. 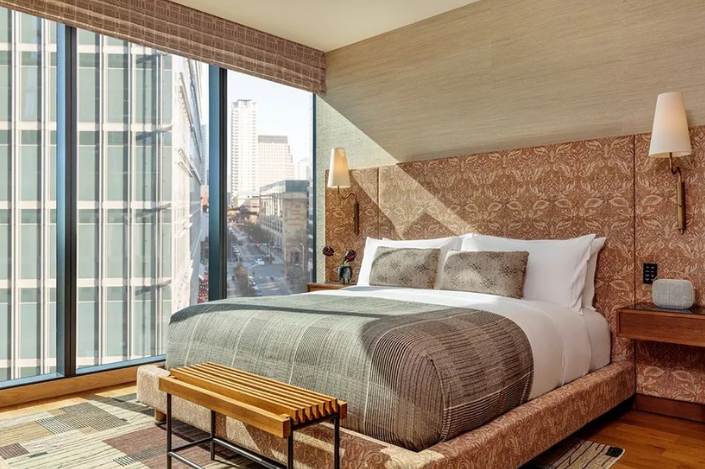 A step through the giant black doors of the hotel and it is clear that the designer based in Los Angeles, Kelly Wearstler, spent time getting to know the Texas landscape and the city of Austin. The lobby, a series of enclosures designed with patinaed club chairs, loveseats upholstered in the rusty reds, dark greens and golds of the surrounding hill country, and wrought iron light fixtures of the 1930s, points to the Arts and Crafts bungalow houses the area is known for. While Austin ‘s culture, the fastest growing city in the world, is somewhat dynamic as it transitions between the laid-back indie lover it’s been for a long time to the busy tech-centered city it’s becoming, the Proper – with its heart of downtown location, casual sidewalk café, high-energy lobby bar and the city’s best Mediterranean restaurant, Peacock – is a place where both sides of Austin feel welcome.

Beautiful tourist Cities to visit in Spain in 2022