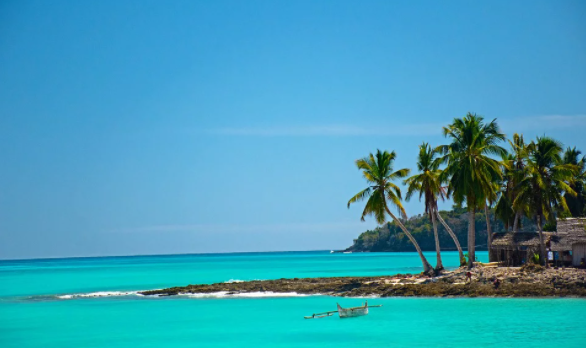 Top 10 Most Beautiful Places to visit in Africa 2022

Africa is a continent with many natural wonders. From the Great Rift Valley to Victoria Falls, Africa has been blessed with some of the world’s most beautiful and captivating landscapes. With so much beauty to choose from, it can be hard to decide where you want to go on your next vacation. It’s not just about safaris and wildlife, but it also offers some of the best scenic views on the planet. Whether you’re looking for beaches or mountains, Africa will have something for you.

Africa is the second largest continent on Earth and is home to some of the most beautiful natural landscapes in the world. From deserts, mountains, jungles, savannahs, and more; Africa has everything you could ever want for a perfect vacation destination.

I am going to highlight 10 of my favorite places in Africa that I have been lucky enough to visit myself as well as research online. These are not necessarily all famous tourist destinations but rather some lesser-known gems that should not be missed!

The most beautiful places in Africa are filled with unique wildlife, rich culture, and friendly people. From the Drakensberg Mountains to the Serengeti, these amazing destinations will change your life. With a vast variety of landscapes and cultures to explore, you’ll never run out of things to do on your African vacation.

Here are the Best Vacation Spots in Africa 2022 to visit: 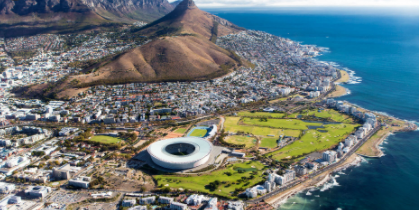 The most beautiful place in Africa in 2022 is Cape Town, South Africa. Known for its world-famous vineyards and diverse culture, this destination has it all: from sprawling beaches to incredible mountain views. When you’re not exploring the stunning geography of the region, you’ll love sampling local wines or watching a spectacular sunset at one of many coastal wine farms.

Cape Town is said to be one of the most beautiful, iconic places in all of Africa. A tourist can explore famous attractions like Robben Island and Table Mountain National Park. If you want to attend a great music festival then Camps Bay or any resort would work for that! 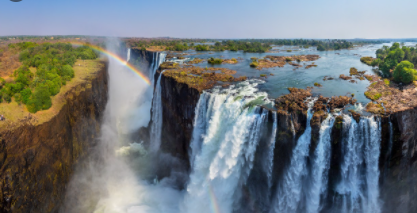 The second most beautiful place in Africa is Victoria Falls. Located on the Zambezi River, this natural waterfall is one of the seven wonders of the world due to its limitless beauty and power. Beyond just an amazing attraction, there are also miles of restaurants and shops lining both sides of the falls for you to explore as well! The Victoria Falls are also located in Zimbabwe and Zambia. This is one of the cheap holiday destinations in Africa.

The Victoria Falls are a magnificent 108 meters high cascade of water. It is often called “The Cloud that Thunders” and it’s one of the top tourist attractions in Africa as well as the world! This mesmerizing, awe-inspiring waterfall is ranked among some bucket list items for millions around the globe. 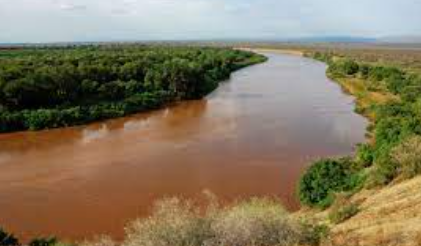 Another beautiful place in Africa is the Omo River Region. This region has been inhabited for millennia and you will see villages with mud huts are scattered around this lush landscape! The Ethiopia mountains can be seen from a distance as well! Some of the most popular attractions found here include Lake Turkana, Dallol volcano, Konso village, and the Karo plateau!

Ethiopia is a country that values its independence and unique culture by restricting external influence. They is slowly opening their doors to let the rest of the world experience its paradise, which you will understand once you visit Ethiopia. Once there, your view of Africa will be changed forever as it becomes one of East Africa’s main tourist attractions. This is one of the best vacation spots in Africa 2022.

Ethiopia has historically valued its independence from outside influences in order to maintain an authentic cultural tradition for itself (although they have recently opened up some). This sense can often come across with travelers who enter into this land primarily because Ethiopians tend not to engage with outsiders due to wanting everyone else to learn about them through first-hand experiences rather than second-hand information or rumors. 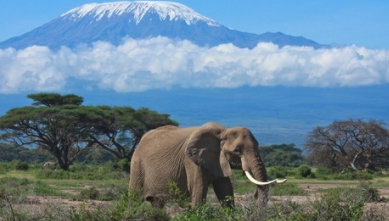 Mount Kilimanjaro is a massive mountain, and one of the most well-known in Africa. The summit can reach 19600 feet high (5895 meters) and its slopes are covered with snow all year round! This World Heritage site not only has gorgeous views but also offers some incredible wildlife that you won’t see anywhere else on the planet.

By climbing Mount Kilimanjaro, you can become the one of 4-6% who makes it to 5,895 meters! You will need a level of fitness that is essential in order for your body to handle all aspects such as lack of oxygen. Be aware: altitude sickness comes with many people while they are on this climb. It also takes 5-10 days to get to the summit. This is one of the cheap holiday destinations in Africa. 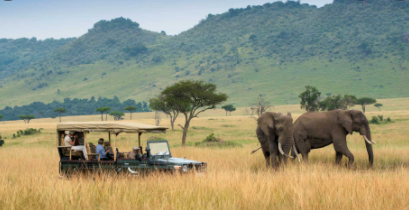 The Maasai Mara National Reserve is a great place to see some of the most beautiful animals in Africa. You will find over 500 species living here and you can visit as many times as you want since it’s one of Kenya’s best wildlife reserves with an average of 50 lions roaming around!

Picturesque landscapes, wild beasts, leopards, and elephants are just some of the animals you will be able to see in this reserve. This is one of the most beautiful places in Africa 2022.

This is a great place for bird watching as well since there are over 400 species found here! Not only can you go on safari during the day but at night too when most people tend to sleep so that your chances of spotting a lion, or any other creature for that matter are higher.

This is the most popular national park in Kenya and it’s no wonder why! It has one of the best game viewing experiences you could find anywhere with wildebeests crossing into Tanzania as well as leopards stalking their prey right outside your tent window.

Continuing through the Maasai Mara National Reserve will lead you to the Serengeti National Park and Game Reserves in Tanzania. This is a great place for nature lovers, birdwatchers, or animal enthusiasts alike!

Continuing down this path should bring you into one of Africa’s most beautiful parks – The Serengeti Nation Parks & Game Reserve. If animals are your thing then we highly recommend coming here as it has been said that over 1 million wildebeests migrate across its plains every year during their annual migration cycle from southern Kenya all the way up to central Mozambique where they’ll find fresh grazing on which to feast before heading back south again next season. 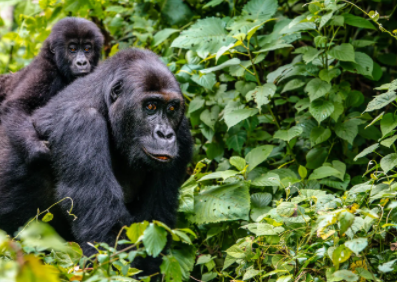 The final stop on this list is Virunga National Park in the Democratic Republic of Congo, which gets its name from Africa’s oldest volcano mountain range. The most famous landmark here would have to be Lake Edward where you can take a boat cruise and see hundreds if not thousands of hippos lounging around the shoreline or even swimming out in the open water. This is one of the cheap holiday destinations in Africa.

The Congo and nearby Uganda are famous for their mountain gorillas, which can be seen in the Virunga National Park. As one of Africa’s first national parks established in 1925, it is also a top location to see chimpanzees in the wild. Tourism has been growing since then as tourists come from all over just to experience this beautiful region with its variety of apes such as chimps who you could climb up Nyiragongo Volcano and find the world’s largest pool of lava! 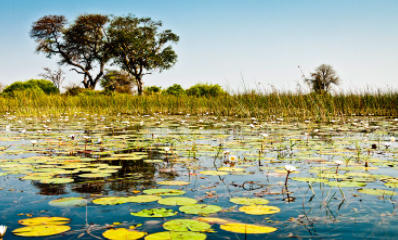 The Okavango Delta is the most well-known wetland of Africa and a true haven for wildlife. The delta starts in Angola before snaking its way into Botswana with dense forests that are home to some of the continent’s most iconic animals like elephants, leopards, and black rhinos. It also boasts a wide variety of birdlife, as well as some of the most spectacular sunsets in Africa. This is one of the best vacation spots in Africa 2022.

The Kalahari is a vast river delta and home to thousands of tourists each year who come to visit the true beauty, wildness, and great game viewing opportunities. Some people opt for flights over light aircraft or hot air balloons but there are also many fantastic land-based safaris that offer visitors some of the best experiences in Africa. 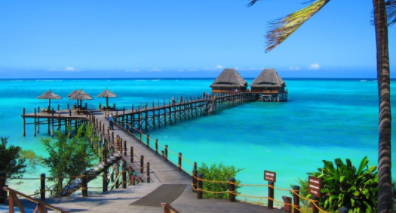 Zanzibar is an archipelago of islands off the coast of Tanzania. Although most famous for its spice plantations and white-sand beaches, those are just two facets in a diverse landscape that also includes mountainous rain forest. It’s one of Africa’s oldest places to settle with people living on these islands as early as 200 BC – so it’s not surprising that the land is dotted with ancient ruins.

The destination has a vibrant history dating back to the 17th century, and it is like no other place in Africa. It features Arabic culture as well as Middle Eastern styles- combining both of these elements with Moorish artistry and Indian influence makes for an eclectic blend that you won’t find anywhere else on the continent. This is one of the best vacation spots in Africa 2022.

Giza is the most famous archeological site in Egypt, and for good reason. It’s home to three of the seven wonders of the ancient world – including one of the largest stone buildings ever constructed: The Great Pyramid.

The Great Pyramid is the last of the seven wonders and was built for Pharaoh Khufu around 2560 BC. The pyramid, located on a plateau just outside Giza in modern-day Egypt, consists of more than 100 million stone blocks that were quarried from nearby hills. There’s an estimated three to four billion pounds worth of limestone blocks in the pyramid alone – and that’s not even including the other buildings on site.

The Great Pyramid is also believed to be built by a workforce of more than 100,000 people over twenty years with only copper tools available at the time. The Egyptians were able to accomplish this incredible feat through meticulous planning: For example, they would cut blocks of stone in the quarries, then drag them on sledges to boats and then pull them up ramps. This is one of the best vacation spots in Africa 2022.

The Great Pyramid is so massive that it covers 13 acres and stands 455 feet high – or 48 stories, which would make it taller than most modern-day skyscrapers! To this day, there are still some mysteries about how exactly the Pyramids were built.

-The Great Pyramid is also the only one to remain mostly intact, since most of it still stands today.

-It’s impossible to know for sure how long it takes visitors on average to get through the pyramid itself – but they’re not allowed inside anymore due to archaeological concerns and security risks (the last time they opened it up to tours was in the late 1990s).

-The most famous – and one of the best – thing about this place is that every year, around October 21st, thousands of people gather outside on a line that’s over two miles long for their chance at the honor of climbing inside. 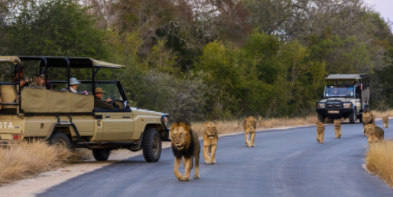 This is one of the most iconic places in all of Africa, a place that’s been around since 1895.

-It spans over two million acres and includes almost 70 mammal species, hundreds of bird types and an enormous diversity of plant life (including some very rare ones). This is one of the best vacation spots in Africa 2022.

-The park isn’t just for viewing – it’s also for protection. It has a strict animal relocation policy that helps keep the balance of nature intact and as natural as possible.

-Tourists are encouraged to come here to see some of Africa’s most iconic animals roaming around freely, while at the same time supporting those who have been working tirelessly since 1895 to protect them from extinction.

SEE THIS: Interesting Facts about Uganda