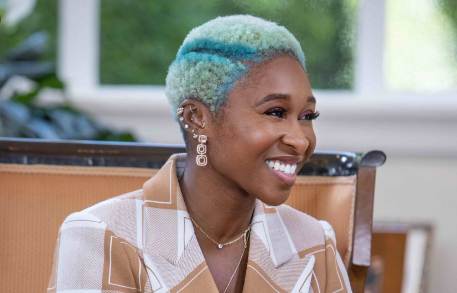 All about Cynthia Erivo

On this page, you will get all the required information about the Grammy award-winning English-born Nigerian actress and singer. Have a good read.

Cynthia Erivo is a popular English actress, singer, and songwriter whose real name is Cynthia Onyedinmanasu Chinasaokwu Erivo. Cynthia Erivo has received several awards and accolades which includes a Grammy award, a Tony award, and also has been nominated for Academy awards twice.
The actress is renowned for her roles in Widows (2018), Bad Times at the El Royale (2018), and Harriet (2019).
And the June 12 of 2016 Cynthia one best leading actress for the movie ‘The color purple’ in musical Tony awards.
that was the same movie he was popularly known for in Broadway production, she was also renowned for her performance of sister act in the UK tour.

Hollywood actress Cynthia Erivo was born on 8th January 1987 which makes her currently 33 years old in 2021.
She was born in Lambeth, London, England but resides in Stockwell London.

Cynthia Erivo is of Nigerian descent and Nigerians are proud of her. she was born to Nigerian parents who raised her well in Stockwell. Cynthia’s mother is a nurse and she also has a junior sister who has a podcast on Instagram.

Cynthia Erivo attended the University of East London when she started studying music psychology but something happened, a year into her degree she applied to Royal academy of dramatic art and got trained there.

Back in 2013, it was confirmed in reports and news sources that she was in a relationship with actor and singer Dean John Wilson. Fast forward to June 2016 after she won her Tony award, Cynthia Erivo met Mario Martinez and they officially started dating in late 2017.

Cynthia Erivo is still very much single and not married. However, the actress is currently in a relationship with Mario Martinez that could lead to marriage.

Cynthia Erivo is very perfect in her theatre performance and this can be seen in her works for Broadway productions as she got awarded with drama desk award and Tony awards.

After Cynthia has gained prominence in the movie industry, she’s tired and produced a 7-episode scripted podcast which was a science fiction thriller called ‘carrier’ from audio firm Qcode media. In the podcast, she played the lead role named Raylene Watts who was a truck driver that transported a trailer with mysterious and disturbing contents.

Cynthia made her acting debut in 2011 in a stage production of The umbrellas of Cherbourg. She had her first screen roll in an English television series of 2015 known as chewing gum.

She picked up huge recognition when she starred in Broadway’s remake of The color purple from 2015 to 2017. The color purple she won Tony award for best actress in a musical in 2016. That’s a movie that gave her the best musical theatre album award at the Grammys. In 2018, she took a step further by venturing into films and this was when she got roles and starred in heist film (Widows). She also started in the thriller (Bad Times at the El Royale). The movie that doesn’t have very popular is when she portrayed the abolitionist Harriet Tubman in the biopic of 2019 (Harriet). for this movie, she received an academy award nomination for best original song and best actress.
Currently in 2021, she has starred in a crime drama miniseries – The outsider.

Cynthia Erivo is a popular English actress and singer who is renowned for her outstanding role in the biopic movie ‘Harriet’. Cynthia currently has an estimated net worth of $5 million in 2021.