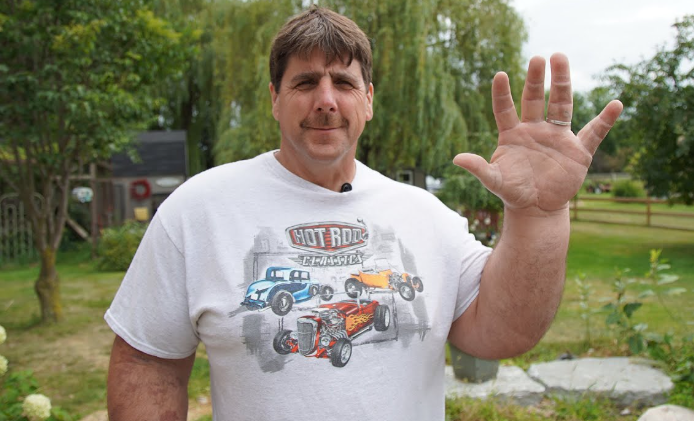 Largest hands in the world 2023

Are there really big hands in the world?

It is an interesting question that has been asked by many people over the years. With advances in technology, it is now possible to measure the size of a person’s hands and compare them to those of other people. This has made it easier to determine if someone has abnormally large hands or not.

Despite the fact that all humans have a similar physical makeup, there is wide variation in the size of their hands. This is due to genetics, environmental factors, and even lifestyle choices. While some individuals may have larger hands than others, there is no evidence that one size of the hand is inherently better than any other. Although we may not all have the same-sized hands, we can still use them to their fullest potential regardless of size.

Hand size is influenced by a variety of variables, including hormones, height, age, gender, and genetics.

Large hands are sometimes interpreted as a representation of strength and power, while others believe they reveal a person who is adept at physical labor.

In the end, it is up to the person to determine what having big hands means to them.

One can, however, change the size of their own hands with adequate stimulus.

Baseball, softball, lacrosse, tennis, cricket, weightlifting, rock climbing, gymnastics, and bowling are just a few of the sports that can affect hand size.

A lot of people have unusually large hands due to heredity, height, or even just training. 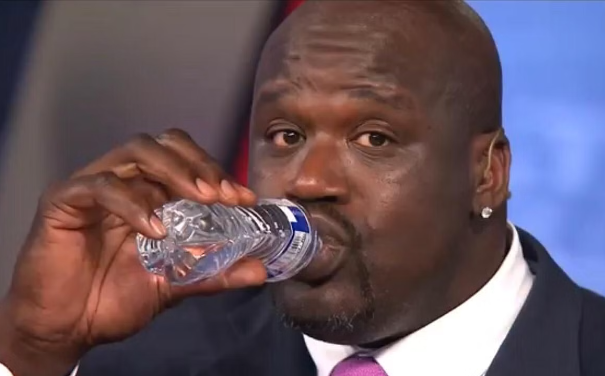 Large hands that put other centers in their place were the most immovable power in basketball, which made sense. Even though Shaq’s hands were never measured, fans were able to see them more clearly when he compared them to Kawhi Leonard’s. Diesel was a big man and he wore a size 22, so it’s logical to presume his hands were big too. Others contend that Shaq’s free throws were awful because the ball was too small for his hands, despite the fact that it had its advantages. 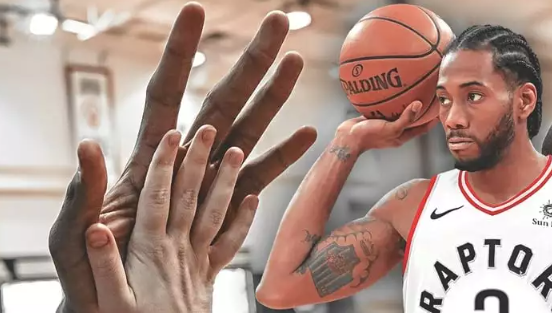 Kawhi Leonard’s mother reportedly noticed that his hands were unusually big compared to the rest of his body when he was a baby. He had huge hands, even as a toddler. As a freshman, Leonard played wide receiver for Canyon Springs High’s football team. He couldn’t find any receiving gloves in his school’s equipment room, so they had to send him to a nearby sporting goods store to buy some. Unfortunately, they had to do a custom order because “The Claw” did not fit the largest size in the store. Leonard stands at 6’7″ and has hands that measure 9.75″ in length and 11.25″ in width. The average length and width of a 6’7″ guy 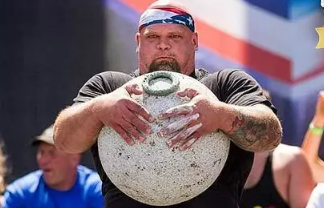 Ken Mcclelland, owner of The Anvil gym in Cedar Rapids, is 40 years old and has been competing in the sport of strongman for more than four years. He is the reigning Ultimate Strongman Masters global champion. 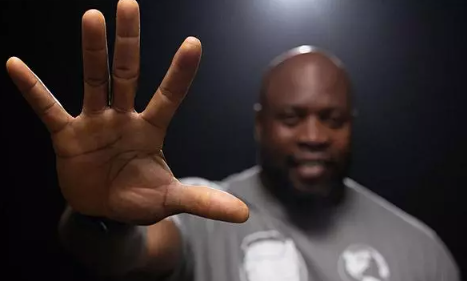 Strongman competitor Mark Felix, of Grenadian and English descent, usually takes part in the World’s Strongest Man competition. In addition to the Vice Grip Viking Challenge in 2011 and 2012, he also won the Rolling Thunder World Championships in 2008 and 2009. Felix, on the other hand, is renowned for having a powerful grasp. His hands are the largest in the world, with a spread of more than 12 inches, and he holds a number of grip-based world records. 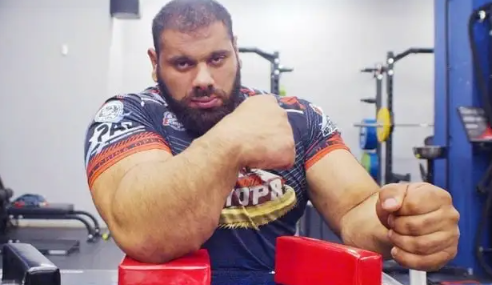 While Levan Saginashvili’s name might not be well-known to many arm wrestling enthusiasts worldwide. But when compared to the most well-known athletes in the sport, the Georgian arm wrestler has been the world champion since 2019. Levan, who is 170 kg and 6 feet 3 inches tall, is known as the “Georgian Hulk” because of his size and disposition. The 34-year-old has a huge arm, dwarfing the wrists of other arm wrestlers with a wrist that is almost 13 inches long. Levan has won the World Arm Wrestling Championships (WAF) seven times, six times in Europe, the 2017 World Cup, and the Top 8 in the European Arm Wrestling Championships in 2019. 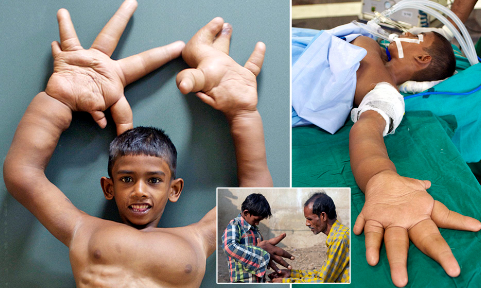 Mohammad Kaleem was known as the “Boy with the World’s Biggest Hands” before undergoing major surgery to decrease his hands. The eight-year-old was born with an illness that led to the development of his hands and limbs, which eventually resembled enormous hands and weighed a whopping two stones between them. Kaleem was taken to a neighboring village hospital where he was diagnosed but not treated because the young boy’s parents, who make less than £15 a month, couldn’t afford to pay for doctors.

Due to the Macrodactyly, or local gigantism, that has caused Kaleem’s gigantic hands to grow to a length of 33 cm from wrist to fingertips, superstitious villagers believed he was cursed. The boy, who was the subject of Channel 5’s The Boy With the World’s Biggest Hands, was made fun of, called the “devil’s child,” and even refused admission to a school. He struggled to dress, eat, or even take a shower because of his enormous hands, which weighed more than five and a half pounds each. The eight-year-old was identified as having macrodactyly, or localized gigantism, but is now receiving treatment in south India.

Sultan Kosen of Turkey now possesses the longest hands in the world, which most likely contain the world’s longest fingers. His hand is longer than 11 inches from wrist to tip of middle finger. That is almost a foot tall! When Sultan spreads his fingers widely, his hand measures exactly 12 inches. Players in basketball and football would like to have those hands! Sultan Kosen had the largest hands and feet, measuring 27.5 cm and 36.5 cm, respectively, and was 8 feet 1 inches tall when he was measured for the record. Kosen is currently 8 feet 3 inches tall, however, experts in the US later announced that he had stopped growing as a result of treatment. 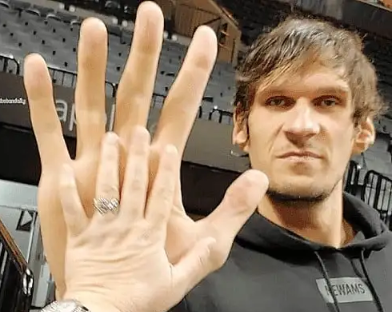 The jovial Serbian giant may even be in the running for having the largest hands in the entire planet. His hands are the largest in NBA history. Boban appears to hold a grapefruit when he accepts a pass from his teammates. Marjanovic’s gigantic hands gave rise to the amusing Reddit post “Boban holding items.” He hasn’t had his hands measured, so we don’t know the actual number. This conclusion was reached after seeing numerous pictures of Boban comparing his hands to those of NBA stars. His estimated size is in the 12-12.25 range, which is close to the hand size record holder for the world. 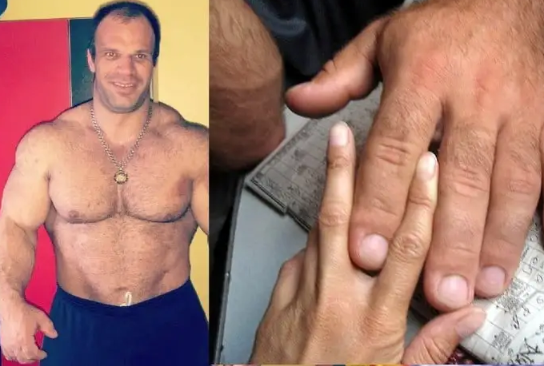 With 25-inch biceps, Denis Cyplenkov has the largest biceps in Russia (63,5 cm). 35-year-old Denis Cyplenkov is 6’1″ tall and weighs 308 lbs (140 kg). He is a Russian champion in the bodybuilding, arm wrestling, and strongman sports. When Denis first started going to the gym as a young child, he quickly learned he had great strength, so he started participating in arm wrestling competitions. He won the Nemiroff World Cup in 2010 and 2011, one of the most prominent international arm-wrestling competitions. Along with his incredible strength, he claims to have the biggest, most muscular hands in the entire globe, earning him the nickname “Hulk.” 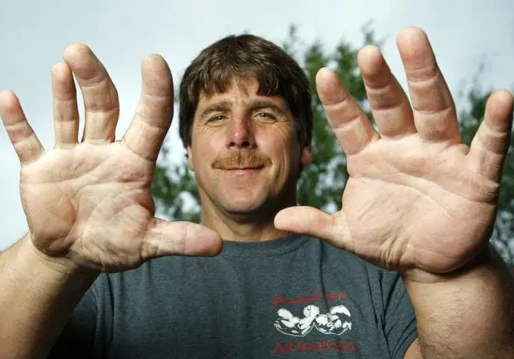 Jeff Dabe of Minnesota has earned the moniker Popeye from arm wrestling fans as he strives to become the world champion. His hands are large enough to hold a basketball, and his forearms are 19 inches (49 cm) in size. Since photographs show Dabe was born with disproportionately enormous limbs, examinations were done to attempt and determine what makes his arms so extraordinarily large. He has hands that are big enough to comfortably span a piano keyboard and can palm a basketball. In order to determine whether there was any evidence of gigantism or elephantiasis, the University of Minnesota conducted tests. However, the results revealed that this was not the case.