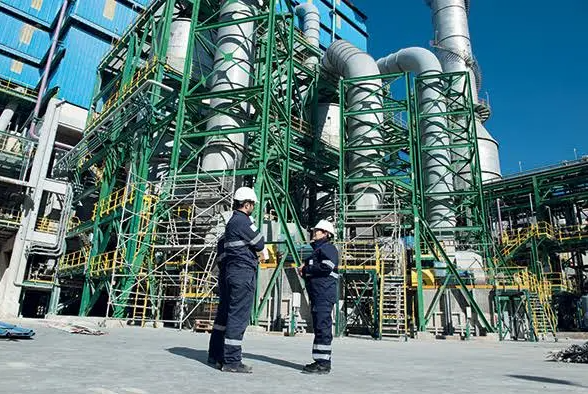 Top Fertilizer Companies in The World

Introduction: The Global Fertilizer Industry and History of Fertilizers

The fertilizer industry is an important part of the agricultural sector and has a significant impact on the world economy. It is a global industry, with production in many different countries.

Fertilizers are used to improve soil quality and to grow plants and crops. They provide nutrients that can’t be produced by the soil alone.

The history of fertilizers dates back to ancient times when farmers discovered that adding manure or other organic matter (such as leaves) improved crop yields.

How Do Fertilizers Work in Agriculture?

Fertilizers are substances that are added to the soil in order to provide plants with the nutrients they need for healthy growth.

Fertilizers come in many different forms, such as manure, compost, and synthetic fertilizers. Synthetic fertilizers are the most common type of fertilizer and they often contain nitrogen, phosphorus, and potassium. These three elements are essential for plant growth. They are also referred to as macronutrients because they make up a large proportion of plant food.

Fertilizers play a crucial role in all agricultural processes. Whether you want to boost yield or productivity, fertilisers play a critical function that you can’t ignore. Proper fertilizer application in the right proportion can boost production by a factor of ten, resulting in a spectacular end result.

Although there are many fertilizer firms operating throughout the world that claim to be able to meet the demands of farmers, only a few can be trusted. Let’s have a look at the top fertilizer companies in the world in 2023.

Here are the Top 10 Largest Fertilizer Companies in The World 2023; 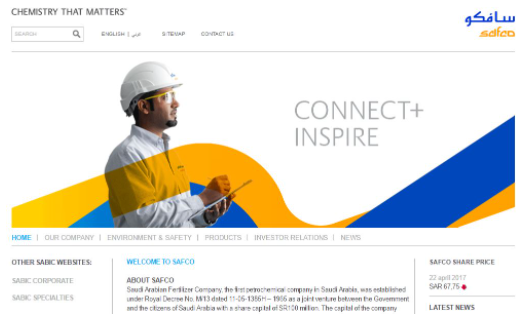 The Saudi Arabian Fertilizer Enterprise, or SAFCO, was founded in 1965 and is the country’s first petrochemical company. It was established as a cooperative venture between citizens and the government of the country with the goal of increasing food yield through shared funding. It took a big step forward at the time and has since proven to be one of the greatest fertilizer firms in the world. They ensure the quality of their products, as well as the happiness of their customers and the interests of their stakeholders. 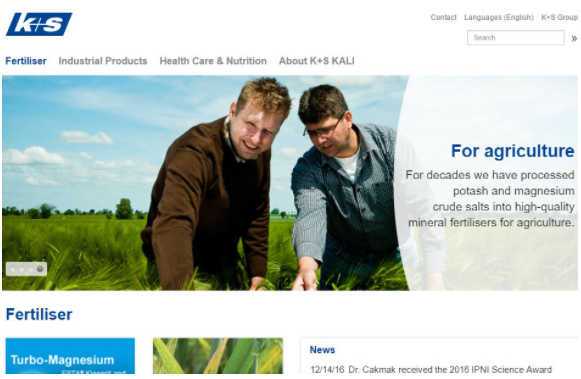 K+S AG, formerly known as Kali and Salz GmbH, is a German chemical firm headquartered in Kassel. It is also one of the world’s major producers of salt, in addition to being the world’s largest supplier of chemical fertilizer and potash. K+S AG produces and supplies a number of other key minerals such as magnesium and sulfur internationally, with a focus on Europe, North and South America. Founded in 1889, the corporation has acquired and amalgamated with a number of smaller fertilizer companies, resulting in one enormous entity that trades vital fertilizers and chemicals. 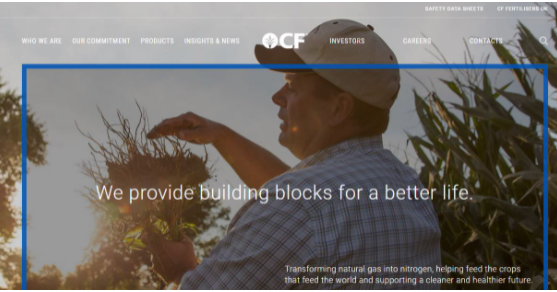 CF industries, which are around 70 years old, have proven their usefulness by providing some of the best chemicals and fertilizers to boost the production and productivity of produce. The high quality of the items, whether nitrogenous, potash, or phosphorus, are all traded with noteworthy service by the organization. Because of the outstanding quality and high end results, people have gained faith and dependability in their fertilizers and chemicals. They have a big list of agricultural and industrial products that have been thoroughly evaluated and have a high rate of performance. 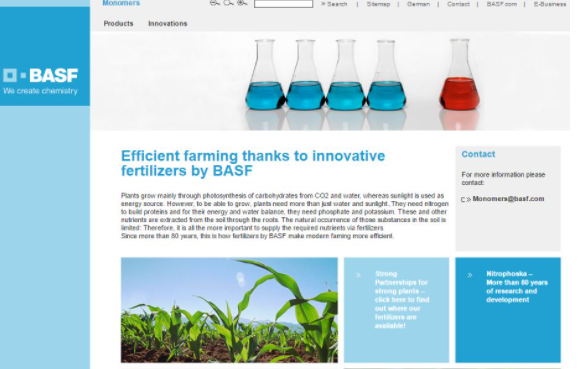 BASF has evolved as a promising fertilizer and chemicals company that has maintained its quality and perfection in all of its products, with the tagline ‘We Create Chemistry.’ They supply a wide spectrum of primary, secondary, and tertiary nutrients, as well as essential compounds needed to boost crop growth. They also verify that the products are safe and secure for the environment. Aside from chemicals, they also offer services in other agricultural fields. BASF crop production products are also dependable, ensuring high quality and output. They work in animal nutrition as well as crop nutrition. 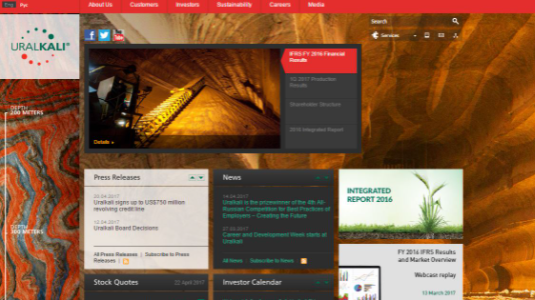 Uralkali PJSC is a fertilizer firm based in Russia that has outperformed all other fertilizer companies in the country. In many regions of the world, it is the largest trader and supplier of fertilizers and chemicals. Brazil, India, China, Southeast Asia, Russia, the United States, and Europe are the key markets for this company’s fertilizers. It has recently been one of the most important industries that has provided a high-quality product and thus managed to establish a strong presence in the market. Potash ores and reserves make it the second largest in the world in this field. 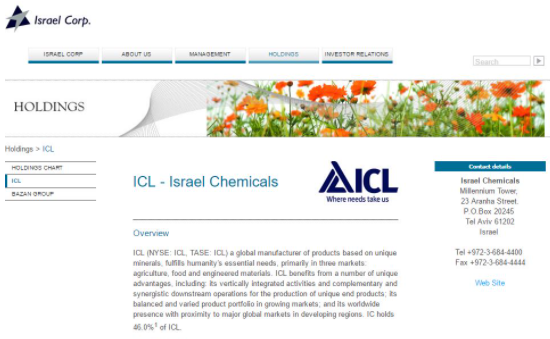 Israel Chemicals Ltd. is a multi-national chemical manufacturing company that produces high-quality products such as fertilizers and other related chemicals and has claimed a significant increase in production. The corporation, often known as ICL, services a wide range of industries, the most important of which are agricultural, food, and engineered products. Apart from high-quality fertilizers, the company also produces chemicals such as bromine in massive quantities, accounting for nearly a third of the world’s bromine supply. It’s also the world’s sixth-largest potash producer. The Israel Corporation, one of Israel’s major corporations, is in charge of the ICL’s operations. 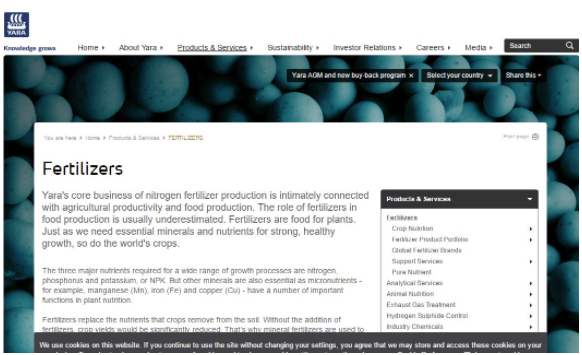 Yara International was created in 1905 with the primary goal of resolving the acute famine that afflicted Europe at the time. Yara International has gone a long way since its founding in 1905, and is now one of the most well-known fertilizer firms in the world.

Aside from fertilizers, they also offer crop nutrition programs and technology solutions for increasing agricultural productivity. They also try to improve the product’s quality while ensuring that agricultural operations do not have a harmful influence on the environment. As a result, we may summarize Yara’s capabilities as crop nutrition solutions, nitrogen application solutions, and environmental solutions. 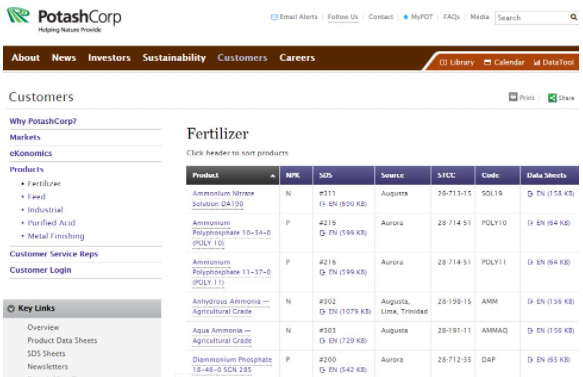 NPK, or Nitrogen, Potassium, and Phosphorous, are the three most important and primary crop nutrients. Potash Corporation is a dedicated fertilizer company that assures the highest quality fertilizers, as well as key secondary nutrients and other compounds, to increase crop yields in a variety of ways. The company’s Canadian operations have the distinction of accounting for one-fifth of global capacity, which is a significant accomplishment in and of itself. They also serve countries in South America, the Middle East, and Asia with their services. Potash Corp has played a significant role in recent years in increasing productivity and thereby meeting the world’s food needs. 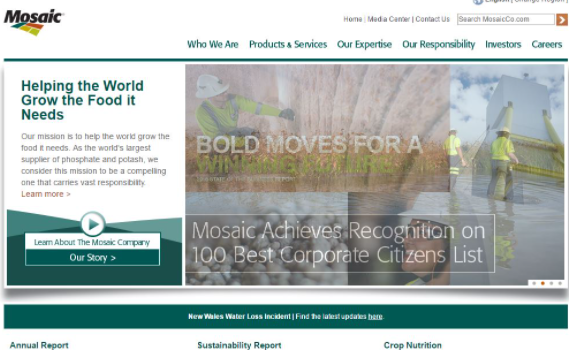 The Mosaic Company is the world leader in the production of integrated potash and phosphate, as well as their marketing. The company has offices in six countries and employs over 9000 people to assure high-quality goods and outcomes. They have land owned by Mosaic in Central Florida where they mine phosphate rock. Aside from that, they possess land in North America where potash was previously mined. The mined materials are then processed to generate crop nutrients before being traded to other parts of the world where agricultural centers thrive. 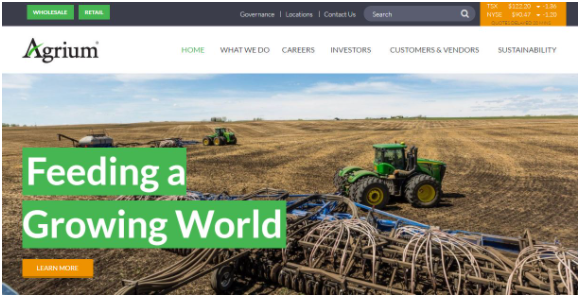 Agrium has established itself as one of the top fertilizer firms in the world as one of the major global distributors of fertilizers. Because fertilizers are so vital in enhancing food yield, our reliance on them has taken a toll. To make things simpler,

Agrium is committed to producing and supplying important and primary fertilizers such as nitrogen, phosphate, and potash in huge quantities. By delivering high-quality fertilizers and chemicals, the company has expanded into North America, South America, and Australia. They also provide seeds, crop protection goods such as insecticides, herbicides, and pesticides, as well as provide agronomic advice and application strategies to crop growers.

Why Is the Global Demand for Fertilizer Rising?

The global demand for fertilizer is rising because the world population is growing.

Increasing population means more people are eating, which in turn requires more food to be grown.

Fertilizer is used to make the soil richer and more fertile, which means that it can produce a greater yield of crops per acre.

This has increased the demand for fertilizers around the world.

how many fertilizer companies are there in india

The Indian fertilizer industry is one of the largest in the world and has been growing at a rate of about 10% per year for several years now.

Fertilizer is essential for agriculture, as it helps to increase crop yields and produce healthier plants.

India imports most of its fertilizers from other countries, with China being the main supplier.

how to value fertilizer companies

We can value fertilizer companies by looking at the following factors

Value of the company’s tangible assets: the higher the value, the higher is its worth.

The company’s return on equity: a company with a high ROE is more valuable than one with a low ROE. The average ROE for fertilizer companies is 12%.

The company’s debt to equity ratio: we want to see if there are any debts that need to be repaid. A high debt-to-equity ratio means that there are debts and the company is less valuable.

The company’s current ratio: this measures how well it can pay off its current obligations with its current resources. The higher, the better for valuation purposes.

Conclusion: The Future of the Market and Possible Obstacles

The future of the market is uncertain and unpredictable. However, it is possible that the market will be disrupted by new technologies in the form of AI. There are some obstacles that might hinder this disruption, but with time and effort, they can be overcome.