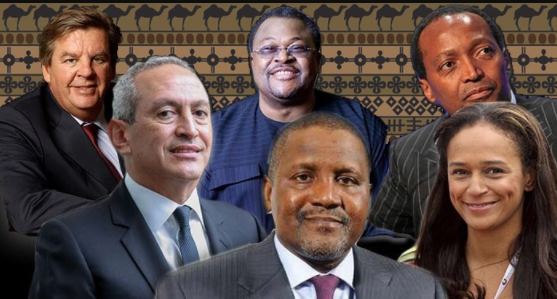 Africa is a beautiful continent that boasts of hosting some of the world’s richest people. The continent has been blessed with both men and women who have over the years amassed a huge amount of money which they have positively use in changing the state of the country they are from and the continent at large.

These individuals are notable for not only their business acumen but also for their philanthropic acts. They have in one way or the other contributed positively to the state of their countries. I’m sure at this point you probably might be wondering who these guys are?

Worry less, cause in this post I will be giving you a countdown of the top richest men in Africa 2022. With no doubt am sure one popular name you’d all be expecting to hear is Aliko Dangote. His widely famous in Africa most especially in Nigeria where he is from. But is he the richest man in Africa? Will he take our number one spot? Or is there someone else richer than Dangote in Africa? If you want to get answers to all your questions, I’d advise you to continue reading.

These are the richest people in Africa in 2022 and their current net worths:

First on our list and occupying the 10th position is Mohammed Mansour, a wealthy billionaire from Egypt. Mansour is a reputable businessman and once a politician. Mansour is the CEO of Mansour Group, a company that is worth US$6 billion. It also Braga itself as the second-largest company in Egypt in terms of revenue. Forbes estimated Mansour $2.3 billion as of 2019. Mohammed is one of the top 10 richest men in Africa 2022.

Isabel dos Santos occupies the 9th spot on our list of the top ten richest people in Africa 2022. Born on the 20th of April 1973, Isabel is an Angolan businesswoman. Isabel is currently known to be the richest woman in not just her country but in Africa. Isabel is known to be the eldest child of Angola’s former President José Eduardo dos Santos. Her father led the country from 1979 to 2017. With an estimated net worth of US$2 billion making by Forbes, Isabel is known to be Africa’s first female US dollar billionaire. Forbes documented how Isabel acquired her wealth by taking stakes in large companies in Angola. Forbes suggested that she became wealthy due to her family’s power and connections. BBC In November of 2015, named Isabel as one of the 100 most influential women in the world.

8th on our list of top ten richest men in Africa 2022 is Jacobus Petrus popularly known as Koos Bekker. Bekker was born on the 14th of December 1952, he is from South Africa. Bekker is a billionaire businessman and the current CEO of media group Naspers. The company has branches in 130 countries and is featured on the London Stock Exchange as well as Johannesburg Stock Exchange. The company has the largest market capitalization of any media company outside the U.S. and China. With a huge net worth of $2.5 Billion, Bekker is known to be one of the richest men in Africa 2022.

Taking the 7th position on our list of the top 10 richest men in Africa 2022 is another Egyptian named Naguib Onsi Sawiris. Known to be a billionaire businessman, Sawiris is the CEO of Weather Investments company and Orascom Telecom Holding. Two very prominent companies in Egypt. With an estimated net worth of $2.8 billion, Sawiris is currently one of the richest men in Africa.

Issad Rebrab is an Algerian billionaire businessman, with an estimated net worth of $7.5 billion, Issad is the chairman of Cubital industrial group, the company is known to be the largest private company in Algeria, and is actively engaged in steel, electronics food, and agribusiness. In 2019, due to tax issues, Issad was sentenced to six months, and also for banking and customs offenses. With such wealth and power, Issad makes our list as one of the richest men in Africa in 2022.

Abdul Samad Rabiu is a Nigerian billionaire businessman. Rabiu’s now late father, Khalifah Isyaku Rabiu, was known to be one of Nigeria’s industrialist’s pioneers in the 1970s and 1980s. Abdul Samad is the CEO of BUA Group, a Nigerian company concentrating on manufacturing, infrastructure as well as agriculture, and producing revenue in excess which has amounted to about $2.5 billion. Abdul Samad is also known to be the chairman of the Nigerian Bank of Industry (BOI).

Johann Rupert is a South African billionaire businessman. Rupert is the eldest son of business giant Anton Rupert who is married to Hubert. Rupert is the current chairman of the Swiss-based luxury-goods company known as Richemont and the South Africa-based company also known as Remgro. Rupert is currently estimated to be worth $5.9 billion and was named the second wealthiest person in South Africa by Forbes list of The World’s Billionaires as of the year 2019. In recent times Rupert’s fortune has been reported to have declined from US$7.3 billion. He and his family were named the second-richest family in South Africa by Forbes in 2020. They cumulatively have a fortune worth US$5.4 billion.

Michael Adeniyi Adenuga popularly known as Mike Adenuga is a Nigerian billionaire business tycoon. Currently known to be the second richest person in Africa. Adenuga company Globacom is Nigeria’s second-largest telecom operator, which has branches in Ghana and Benin. Adenuga owns stakes in the Equitorial Trust Bank and the oil firm Conoil. Forbes has currently estimated his net worth at $5.7 billion as of July 2020.

Aliko Dangote takes the 1st spot on our list of the top ten richest men in Africa. Dangote is a Nigerian business tycoon and philanthropist. Dangote is the richest man in Africa in 2022 and is widely known as the richest Black person on earth.  Dangote has an estimated net worth of US$13.5 billion. No doubt no one has been able to take over him. We could write an epistle about this great man and it still wouldn’t be enough. Dangote has greatly contributed positively to his country, Nigeria to Africa, and the world at large. All hail the richest black man on earth. Aliko Dangote!