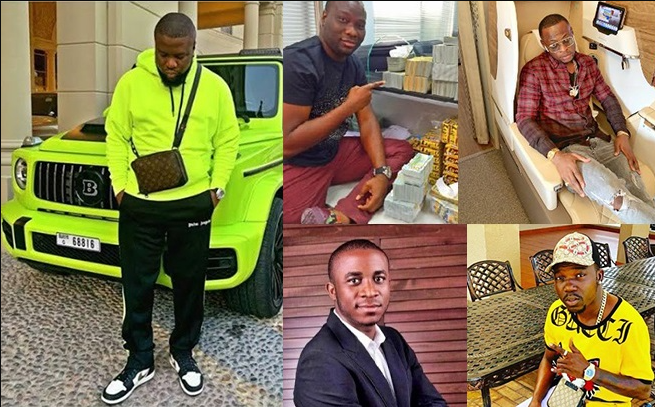 Yahoo boy is a popular term in Nigeria, given to individuals mainly male, who lives a lavish lifestyle with an unknown source of income. Yahoo boys are mainly known to be fraudsters. They fraud people of their money. On this list, not every name mentioned is basically fraudsters. They only qualify the status of being a yahoo boy, because they live a very lavish lifestyle, with their source of wealth not fully known. They live in mansions, wear designer clothes, go on expensive trips regularly and parade big clubs in Lagos, not forgetting their own exotic cars. This lifestyle isn’t affordable by everyday Nigerians, hence these guys are labeled Yahoo boys.

In this post, we will be bringing to you the top 10 richest yahoo boys in Nigeria. These guys are wealthy and are always flaunting their wealth on social media. They are widely famous due to their lavish lifestyle. They are also referred to as celebs, cause they have fans also. They have people who love their lifestyle and wish to be like them. But in all, one thing is Cristal clear, their source of wealth remains unknown. If you’re ready, let start with number 10.

These are the richest yahoo boys in Nigeria and the world in 2022:

10th on our list of top 10 richest Yahoo boys in the world 2022 is Deskid Wayne. He is popularly known for his immodest lifestyle. His lavish spending is always causing a stir on social media. Deskid got social media buzzing when he shared a video of himself burning a lot of dollars. This sparked a nationwide reaction on social media, but he still never feels bad about his lifestyle. Pictures of himself and his girlfriend are always admired by fans online.

Investor BJ as he is widely known as is another lavish spender who loves the popular Gucci brand. He constantly shows fans videos and pictures of him acquiring expensive Gucci products, including clothes, bags, shoes, or literally any Gucci product. He became even more popular after 9ice mentioned him in a hit single titled “Living things”. Investor BJ also has quite a lot of fans on social media who love his lavish lifestyle but still, his source of income is unknown.

B Naira is another Yahoo boy in Nigeria who is likely to be the only Yahoo boy on our list with a clear profile of how he makes his money. B Naira is a musician and it was alleged he made his millions through music. B Naira might not be a very famous artist but he sure is a very famous spender. He is in our list of the top 10 richest yahoo boys in Nigeria due to his lavish lifestyle. B Naira is a graduate of Geography from the University of Lagos. He gained widespread fame due to his hit single ” jasi”. Ever since he has been living in fame and fortune.

7th on our list of top the richest yahoo boys in Nigeria 2022 is the popular Aremo Gucci. By his name, you will know that he is another fan of Gucci brand. Aremo Gucci is a more reserved Yahoo boy who doesn’t like showing his lavish spending. He has one of the biggest fanbases on Instagram who love his lifestyle. Aremo has countless times tried to hide his extravagant spending, but fans are always finding out. It was once reported that Aremo tried hiding some of his expensive houses and cars but it couldn’t be his for long. Fans eventually noticed them and his fame spread even more.

Opa6ix is another famous yahoo boy who loves spending lavishly and is also always flaunting his wealth on social media. He has quite a lot of fans and is always mentioned by the top artist in their songs, artists like small doctor, 9ice, reminisce. Opa6ix spends lavishly and make people wonder if we are not all living in the same country. He had a huge follower on social media with the more percentage being youths who love his lifestyles. Opa6ix boasts of having luxurious houses and exotic cars and loves wearing designers and don’t forget to always flaunt them on his IG page.

5th on our list of richest yahoo boys in Nigeria 2022 is King Jide popularly known as Mayor of Capetown. King Jide is mainly based in Capetown in South Africa. His source of wealth isn’t known too but he isn’t the quietest spender on our list. Jide is a very loud spender who doesn’t hesitate to put out videos and pictures of his spending on social media. Jide due to his lavish lifestyle has a lot of followers on social media. He boasts of having exotic cars and living in luxurious mansions and wearing expensive clothes and jewelry.

4th on our list top 10 richest yahoo boys in Nigeria is the famous Baddy Oosha. He became famous after being mentioned several times on some musician’s songs in Nigeria including; Olamide and Lil Kesh. Baddy Oosha was once in the Nigerian movie industry but soon relocated to Malaysia where he started showing his lavish lifestyle on social media. Since he traveled to Malaysia he has been posting pictures and videos of him in his mansion with exotic cars and luxurious clothes.

Mompha is the only yahoo boy on our list whose source of wealth is known. Mompha owns a business in Lagos where he makes his money from. His lavish lifestyle made him show up on our list. Mompha is also on social media flaunting his lavish lifestyle to his fans. He also boasts of living in a mansion, owning exotic cars, and wearing designers. He also constantly share tips with his fans on how they can succeed in the business world.

2nd on our list of the top 10 richest yahoo boys in Nigeria is the famous Shy Boss. Tho he calls himself Shy Boss, his lifestyle doesn’t say anything of being shy, as he is always showing his fans the expensive stuff he has. He has a huge number of followers on social media and is never lacking something expensive to show his fans. He constantly sends out videos and pictures of his expensive lifestyle, bringing him more fame and envy at the same time. He really is a Boss when it comes to lavish spending.

1st on our list of top 10 richest yahoo boys in Nigeria 2022 is Ray Hushpuppi popularly called Hushpuppi. This guy is more famous than most Nigerian artists. His fan base keeps increasing due to his controversial and lavish lifestyle. Hushpuppi is known for his constant posting of his luxurious lifestyle. He is another lover of the Gucci brand. Hushpuppi boast of owning mansions, exotic cars, luxurious clothes, and jewelry and loves posting expensive foods also. Hushpuppi’s source of wealth isn’t known but he made people know that he was born into a poor family and had to work for everything he owns now. Hushpuppi certainly is the richest yahoo boy in Nigeria.

However, he has been arrested recently in Dubai and is currently in U.S prison on fraud charges.