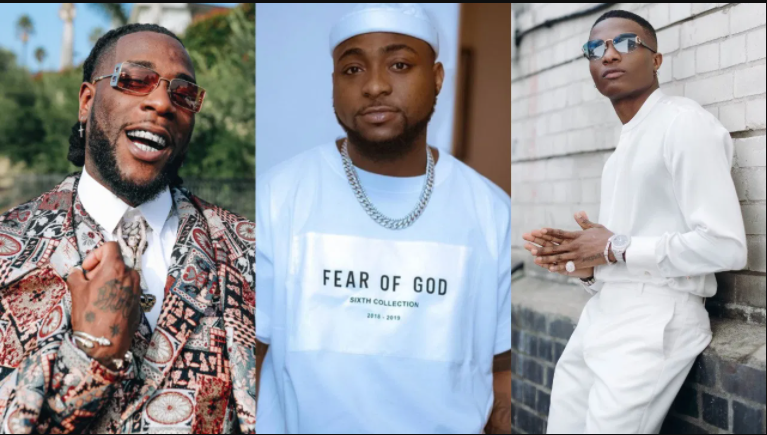 Top 10 Most Streamed musicians In Nigeria 2021

The Nigeria music industry keeps getting richer and better every single day. The country has produced sine of the biggest artist in Africa. These artists are also extending their influence to other continents of the world. Afrobeat is the substance of trade by the Nigerian music industry. Afrobeat has given fane and fortune to lot of A list artists in the country and subsequently gained them international recognition. Popular awards show in Europe have over the years acknowledged the impact of Afrobeat in modern music and numerous awards have been won by a Nigerian artist.

In this post, we will be listing the top 10 most streamed artist in Nigeria. These artists have over the years consistently released music that has made a huge impact in the country and the African continent and extensively the world at large. Artists like Wizkid, Davido, Burna Boy, Tekno miles, 2face, and much more, have over the years raked in the number in terms of streams on all digital platforms including Spotify, Apple Music, YouTube, Tidal, Deezer, and Icloud. If you’re ready, let the countdown begin!

Top 10 Most Streamed Artists In Nigeria 2021

Here are the Nigerian musicians with the highest streams on digital platforms in 2021:

10th on our list of top 10 most streamed artist in Nigeria 2021 is Douglas Jack Agu popularly called Runtown. He is widely known for his Afro-fusion genre of music. Runtown is also a producer but has received more fame and fortune from singing. Runtown road to stardom started in 2014 when he released “Gallardo”, which he featured Davido. Gallardo was released as the first single off his debut studio album Ghetto University.

Subsequently, in 2015 Runtown released his Ghetto University album, which made him over #35 million. Due to the wide explosion of the album, Runtown was ranked the top 5 most streamed artist in Nigeria in 2015. With his breakthrough album, Runtown has gone on to release numerous songs which has both earned him fame and fortune.

With 670k monthly streams on all digital streaming platforms, 9th on our list is Patrick Nnaemeka Okorie whose stage name is Patoranking. Patoranking rose to the limelight with the hit single ” Alubarika” which he did with Timaya of Dem Mama Records. Well known for his reggae genre of music, Patoranking signed a record deal with Foston Musik where he subsequently released “Girlie O” with Tiwa Savage in the remix. The song became an instant hit and gained him more fame. He is one of the Most Streamed African Artists In 2021.

Patoranking has since his debut single released numerous singles and albums which has seen him bagged awards at awards shows both national and international. Patoranking “Three” Album has been one of his biggest ever with the song “Abule” raking in huge figures on digital streaming platforms. The Three Album currently has 297k views on YouTube, 819k on boomplay, and 2.6 million streams on audiomack.

Tiwatope Savage popularly called Tiwa Savage has a monthly stream rate of 820k. Tiwa started her career in UK but was drawn back to Nigeria after she noticed the growth in the Nigerian music industry. She returned to Nigeria and joined Marvins  Records owned by Don Jazzy, and she subsequently released her first album in 2013 titled once upon a time. Tiwa is one of the Most Streamed African Artists In 2021.

The album had seven singles that were an instant hit in the music industry, they include “Kele Kele Love”, “Love Me”, “Without My Heart”, “Ife Wa Gbona”, “Folarin”, “Olorun Mi” and “Eminado”. The album quickly gave her fame and was nominated for the best album of the year in several music awards shows in 2014. The album also raked in millions of streams on digital streaming platforms. Subsequently, Tiwa has hundreds of songs to her name.

7th on our list of top 10 most streamed Nigerian artist is Yemi Eberechi Alade popularly called Yemi Alade. Yemi music career kicked off after she won the Peak Talent Show in 2009. She was immediately signed to Effyzzie Music Group where she released her biggest hit single titled ” Johnny” in 2014. Till date johnny is still her biggest song earning her millions of streams.

The song also gave her fame, as she was immediately loved by fans all over Africa. Yemi has been named Mama Africa due to her numerous tours and genre of music. Yemi speaks French language and has over the years released a French version of her song. This has made her gain more fame in Africa. In 2019 her song Johnny hit a massive 100 million views on YouTube. Making her one of the most-streamed artists not only in Nigeria but in Africa.

Maleek Shoyebi popularly called Maleek Berry gained recognition in the Nigeria music industry in 2012 for being a producer. He has worked with Wizkid, Iyanya, Davido, and other A list artists in Nigeria. Maleek Berry is a British born Nigerian. In 2014 he was nominated for the category of “Music Producer of the year” in Nigeria Entertainment Awards.

Maleek Berry hit single “Kontrol” brought the singer into the limelight. The hit single garnered millions of streams and saw him establish his place in the Nigerian music industry. He has since released numerous hit songs has seen him raked in millions of streams. Maleek now has a steady 1.3 million streams across all digital streaming platforms.

5th on our list of most-streamed artists in Nigeria is one of fans favorite. Augustine Miles Kelechi popularly called Tekno Miles has a steady monthly stream of 1.5 million. Tekno’s career kicked off with a single titled “Holiday” where he features Davido. He was as at then signed to K money entertainment. “Holiday” being his first single, brought the singer much fame as the song was on the major radio stations in the country.

Tekno was reported to have performed at an event where Iyanya and Ubi Franklin attended. They both urged Tekno to move to Lagos to further his career there. Tekno took the advice and came down to Lagos and signed a record deal with Made Man Music Records. He subsequently released “Duro” which was an instant hit in Africa and the USA. The song raked in millions of digital streams for the singer. Tekno now has hundreds of music to his name, making him one of the most streamed artists in Nigeria.

Oluwatosin Ajibade known as Mr. Eazi is well known for his Ghana Afrobeat genre of music. Mr. Eazi is the owner of Baku music, which is simply a fusion of Ghana and Nigeria Afrobeat. Mr. Eazi’s career kicked off after he relocated to Ghana. He started booking the artist to perform at events in universities.

He released his first single titled “My Life”. The song brought him fame as saw the artist bagged awards at Ghana Awards shows. In 2014 Mr. Eazi returned to Nigeria and has released hit upon hits. His career has gained massive success with Mr. Eazi now getting 3.7 million streams on all digital streaming platforms.

Damini Ebunoluwa Ogulu popularly called Burna boy takes the number three spot on our list of the top 10 most-streamed artists in Nigeria with a massive 4.1 million monthly stream. Burna Boy career came to the limelight with the release of ” Like To Party” in 2012. Burna Boy has ever since been releasing hit songs after hit songs.

Burna boy is one of the few artists in Nigeria who have hosted events outside the country with a huge number of attendance. Now referred to as Giant of Africa, Burna Boy released his studio album titled “Twice As Tall”. The album has garnered millions of streams since it releases. And Burna Boy seems not to be slowing down any time soon.

David Adedeji Adeleke popularly called Davido is the second most-streamed artist in Nigeria with a massive monthly 5.8 million streams if his songs, EP, Album, and videos on all digital streaming platforms. Davido is yet another American born Nigerian artist. He grew up in the US but had to drop out of college to pursue his music career right here in Nigeria.He breakthrough the Nigerian music industry with “Dami Duro”, a song from His first debut album Omo Baba Olowo in 2012.

David has gone on to release hundreds of songs with have all done massively well in the Nigerian music industry and the world at large. The two biggest songs of Davido that have brought him to worldwide fame and recognition is “If” and “Fall”. Both songs raked in millions of streams and subsequently saw David rank on the world music chart list. David all through his career has won numerous awards and made fortune.

1st on our list of top 10 most streamed artist in Nigeria is no other than Star Boy Wizkid. Wizkid whose real names are Ayodeji Ibrahim Balogun started his career by signing a record deal with Empire Mates Entertainment, owned by Banky w. In 2011, Wizkid released ” Holla at your boy” which became an instant hit in the music industry. The song gained massive airplay and was sang by literally everyone in the country during its release.

Ever since Wizkid has released hundreds is songs which have relatively brought him fame and fortune. Throughout his career, he has won numerous awards both national and international, he has toured literally the world and widely known for hosting the biggest music event in the country every December. Wizkid is truly a star.