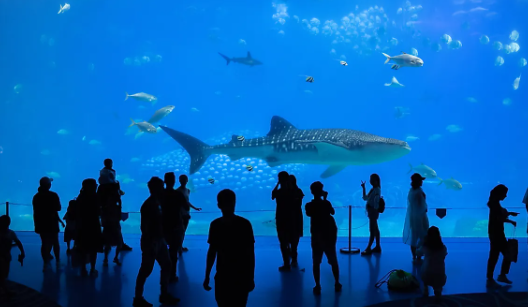 Largest Aquariums in the World

If you love the ocean and want to see it up close, an aquarium is a great place to start. There are many different types of aquatic life in these facilities, such as fish, sharks, rays, and penguins. The world’s best aquariums have incredible exhibits that will make you feel like you’re underwater!

The best aquariums in the world are not only fascinating for kids, but they also provide a way to learn about aquatic life and conservation. The largest aquarium in the world is not found on land, but rather beneath the sea. The Okinawa Churaumi Aquarium is a beautiful and educational experience where visitors can see more than 16,000 marine animals from all over the globe. This list of 10 biggest aquariums in the world 2023 will help you find your way to one that best suits your needs!

Aquatic animals come from all over the world; some live in freshwater, others in saltwater. Aquariums have different ways of displaying their exhibits including tanks with water or sand as well as interactive touch screens that tell you more about each animal.

It’s hard to believe that humanity has only been creating aquariums for about 400 years, and it was not until the 1800s that they became popular. Even though we’ve only had them for a few centuries, people have already come up with so many fascinating facts about the history of aquariums.

What is an aquarium?

An aquarium is a glass or clear plastic container where people keep fish. It usually has water in it and looks similar to an ocean, lake, pond, etc.

The first known aquarium was built by Roman Emperor Claudius in 50 AD. He filled his large basin with water and then stocked it with local fish from Lake Agrippa. It is believed that these were carp because they are mentioned often in ancient texts as being one of the most common types of fish at this time period. In addition, some scholars believe he also included turtles and crocodiles to complete his underwater world.”

Here are the 10 Biggest Aquariums in the World 2023 and sizes:

Located in the port of Valencia, this aquarium is a true oasis for aquatic life. It’s home to more than 36,000 animals from 800 different species! The Oceanografic Aquarium has been ranked as one of the best by Trip Advisor and Lonely Planet.

The Biosphere is composed of nine elegant underwater towers that house samples of the most important ecosystems. Due to its avant-garde architecture, one will admire not only sea life but also the fanciful buildings themselves. This is one of the Biggest Aquariums in the World 2023.

During their route through the various installations, visitors can get to know at first hand the behavior and way of life of more than five hundred distinct species like dolphins, belugas, walruses, sea lions seals penguins turtles rays sawfish jellyfish especially rare oceanic sunfish. 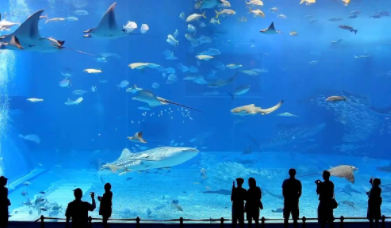 The Aqua Planet Aquarium is located in Jeju, South Korea and it ranks number nine on our list of largest aquariums in the world 2023. The building was designed to resemble a jellyfish floating underwater with its tentacles swaying gently back and forth. Visitors will be able to see the world’s most diverse collection of jellyfish at this location as well as meet a dolphin named “Blues” and explore an artificial coral reef that is home to thousands of different marine animals.

The Hanwha Aqua Planet Jeju is situated on the small island of Jeju, 90 km off the southern tip of Korea. Though their logo still contains a whale shark, they don’t feature those species anymore because in 2012 one out of two died just 40 days after it was brought to this aquarium. 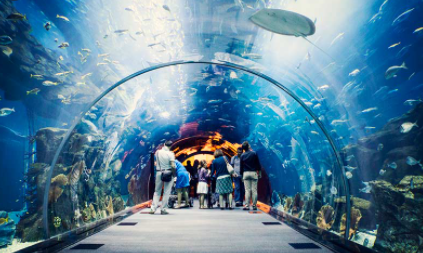 Ranking number eight on our list of largest aquariums is the Dubai Aquarium. This facility contains about 55,000 square meters (13 acres) with over 50 different species of sharks and six penguin exhibits where visitors can see them swimming in water that looks just like a South African beach. Visitors walk along an underwater tunnel to get into the largest part of the aquarium. This is one of the Largest Aquariums in the World 2023.

The gigantic viewing panel itself is certainly the top attraction. It contains over 300 sharks and rays, including the largest collection of Sand Tiger sharks in the world, but other popular denizens consist of sumo-sized groupers and massive schools of pelagic fish. Due to a special ‘lunar-cyclic’ lighting system that changes depending on what time it is during any given day, this aquarium has an atmosphere that can be calming or stimulating as needed – perfect for anyone who needs some peace before starting their workday! 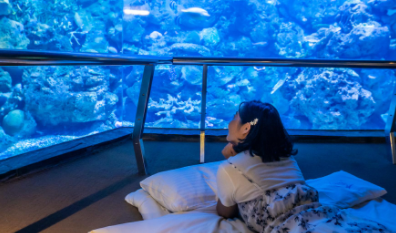 The Kenting National Museum of Biology and Aquarium is ranked number seven on our list. Located in the southernmost city of Taiwan, this aquarium opened its door to visitors back in 2010 with more than 50 exhibits showcasing marine life from around the world. The highlight here is their two whale sharks which make for some great photo ops as they swim lazily around the tank.

This aquarium is ranked number seven on our list because of its location and size. It covers an area of 390,000 square meters (470 acres) with a total capacity of over 560,000 cubic meters (six million gallons). The Kenting National Museum also features some amazing exhibits showcasing marine life from around the world. 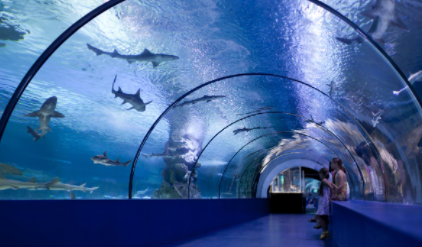 This aquarium is ranked number six on our list because of its size and location. It covers an area of 380,000 square meters (460 acres) with a total capacity of over 530,000 cubic meters (six million gallons). The Osaka Aquarium Kaiyukan has more than 500 tanks that house some spectacular marine animals including the world’s largest, a whale shark. This is one of the Biggest Aquariums in the World 2023.

The Osaka Aquarium Kaiyukan, designed by the famous American architect Peter Chermayeff, is one of the oldest aquariums on our list. Completed in 1990 and showcasing a wide variety of species including otters, sea lions penguins dolphins rays jellyfish among others this interesting building features one whale shark that can be seen from outside. 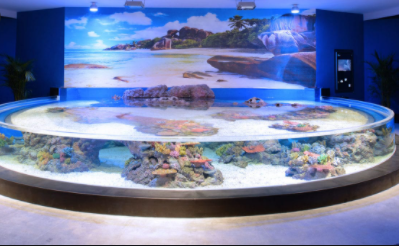 It is worth mentioning that the majority of aquariums in China are located in coastal cities. The Cube Oceanarium, also designed by Peter Chermayeff, has a total area of over 130,000 square meters (1500 acres) and it includes 225 tanks that can house up to 12 million liters (3000 cubic meters) of water. This is one of the largest Aquariums in the World 2023.

The Cube Oceanarium is one of the largest freestanding buildings in China, and it’s also home to the biggest jellyfish tank you’ll ever see. The building itself spans over 100 acres with an additional 50 acres for parking! You can explore more than 33,000 creatures from all around the world inside their tanks or get your fill by exploring some marine life on land at Seaside City Shopping Mall which features a ferris wheel that goes up 500 feet tall as well as other shops like Coach Outlet Store Online. 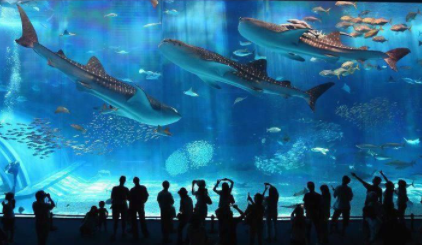 The Churaumi Aquarium is located in the Motobu district of Okinawa and it was, until recently, one of the largest aquariums in Japan. Among its many attractions are an underwater tunnel (the only one on our list), a huge exhibit with jellyfish called “moonlight jellyfishes”, as well as interactive presentations where visitors can touch sharks and stingrays.

The Churaumi Aquarium is part of the Ocean Expo Park in Motobu, Japan. It’s considered to be one of their best aquariums and it was even larger than other large aquariums around the world until 2005 when they built Georgia Aquarium which houses whale sharks (2 at this moment) as well as manta rays alongside a variety of fish species. This is one of the Biggest Aquariums in the World 2023. 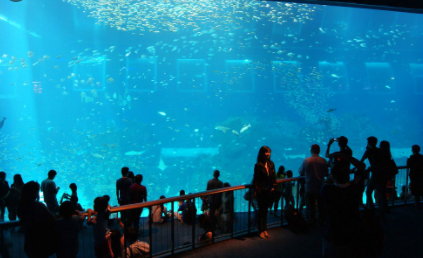 As you’re taking in the sights of this aquarium, don’t forget to also see some marine life. The S.E.A Aquarium is an ocean-themed attraction that houses over 100 species as well as a Marine Life Park and Underwater World with penguins, sharks, and rays among others.

The tanks here are the largest in Asia and contain over 12 million liters of water. This is one of the Largest Aquariums in the World 2023.

The Aquarium of the Pacific is a one-of-a-kind attraction in Long Beach, CA that allows visitors to get up close and personal with some incredible aquatic life. The aquarium features 49 different habitats including southeast Asia and the Arabian Gulf as well as over 18 million gallons’ worth of water for you to explore! One highlight area within this amazing facility includes an Open Ocean tank which holds just shy of 50 thousand animals from all around the world including endangered species like scalloped hammerhead sharks or silvertip sharks. 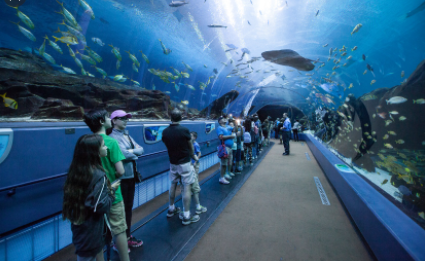 The largest aquarium in the U.S., Georgia Aquarium is home to hundreds of species of marine life and even has a dolphin show showcasing their dolphins, porpoises, and pilot whales! This is one of the Biggest Aquariums in the World 2023.

At over 20 million gallons, this tank is considered to be one of the world’s largest aquariums with 25 exhibit galleries that are more than 100 meters.

The Aquarium is a place for animals that live in the ocean, rivers, and lakes. There are five galleries: Tropical Diver, Ocean Voyager, Cold Water Quest River Scout, and Dolphin Tales. The large donation of US$250 million by American businessman Bernard “Bernie” Marcus made it possible to launch the aquarium which opened downtown Atlanta Georgia 2005.

The largest aquarium in the world 2023 is Chimelong Ocean Kingdom in China, and also one of the most popular tourist attractions on Hengqin Island. The Chimelong Ocean Kingdom features a total of 54 different exhibits with over 35 million gallons of water for your exploration pleasure! Make sure to take some time out from all that exploring (and kicking back) to check out their amazing Dolphin Theater.

The Chimelong Ocean Kingdom is located in Hengqin, China, and opened to the public on December 28th, 2016.

The Chimelong Ocean Kingdom is home to the world’s largest underwater viewing dome and aquarium tank. The Guinness World Records award was given for their tanks of 22.7 million liter because they include strictly the main tank, while other contenders–like Georgia Aquarium with 24-million liters capacity including front holding tanks filters pipes etc. are larger in volume but don’t have just a single large body as Chimelong does; its giant sixty-three meters blue whale shark statue towers over this great building making it also remarkable from outside.