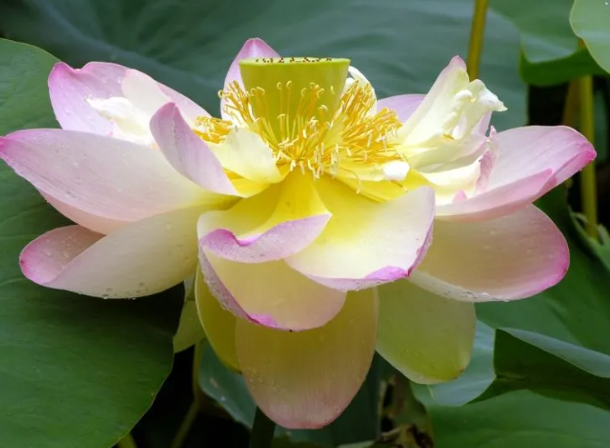 Biggest Flowers in the World

For millions of years, flowers have enhanced the beauty of the planet’s surface.
Plants have been successful in tricking animals and insects into pollinating their flowers by utilizing scent and color to entice them.

There are many lovely and fragrant flowers on earth, but many are the same size (about 1 inch to 5 inches in diameter).

However, size and vivid colors are crucial aspects of drawing insects when it comes to visibility. The smell is another factor in plant reproduction, and there are many flowers with the best scents.

However, we are only including in this post those plant species that have a single-size advantage for their flowerets.

One of the most famous and revered flowers in the world is the lotus.
The magnificent flower is the national flower of India and a worldwide symbol of some of history’s most important cultures.
The hue of a lotus affects its significant meaning.
White and pink lotus blooms belonging to the Nelumbo family are revered.
Red, purple, and blue, which are more vibrant colors, can represent spiritual elevation, enlightenment, or renaissance in lotus flowers.
It primarily thrives in murky, shallow waters, and requires warm sunlight to grow, but cannot tolerate cold climates.
Since this bloom is aquatic, it cannot grow in the winter.
This flower only grows in calm, muddy water beneath the mud, where its roots are buried deeper in the sludge. 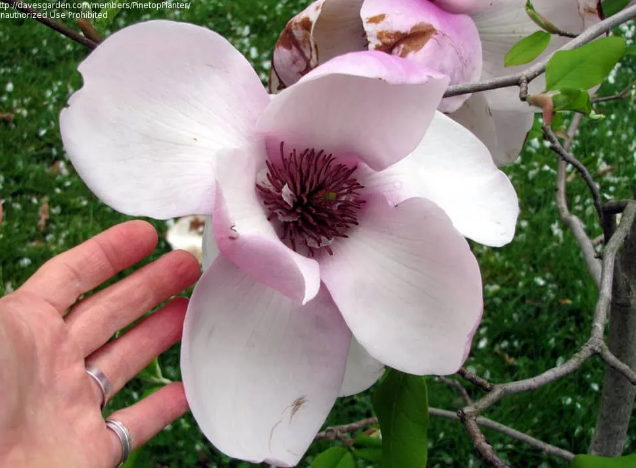 The majority of scientists agree that magnolias were the first flowering plants on Earth.
According to numerous biologists, one of the largest flowering plants on earth is also the planet’s earliest flowering plant.
According to scientific studies, fossils demonstrate that life has been on Earth for at least 100 million years.
Because magnolias are so old, their flowers lack true petals and sepals in favor of tepals that resemble petals.
Although the blooms don’t produce nectar, their fragrant and sweet secretions draw pollinating bugs to them.
According to variation, magnolia blossoms exist in a range of forms, dimensions, and hues.
High, fluffy trees with pink, white, crimson, purple, and yellow blooms make up the magnolia family.
The majority of magnolia types have broad bulbs with a diameter of 6 to 8 inches. 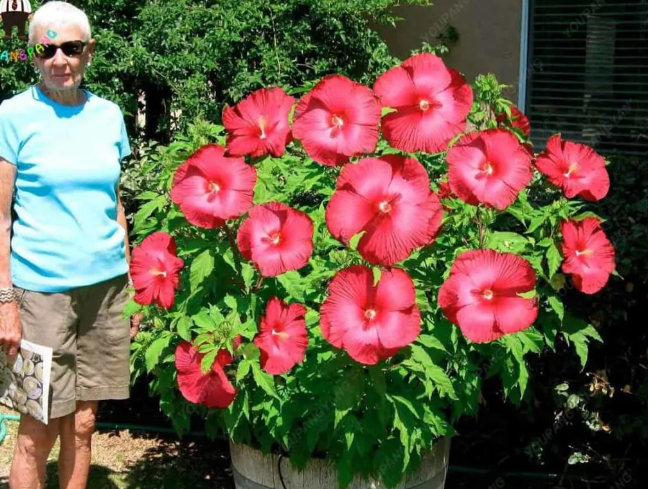 One of the biggest flowers in the world is the hibiscus or Hibiscus sabdariffa.
These stunning, vibrant flowers not only brighten up a house or garden, but they are also medicinal.
These plants come in a variety of hues, including red, yellow, white, and peach.
Hibiscus can reach a width of up to 8 inches in diameter.
The hibiscus family includes a wide range of plants, including annuals, perennials, and shrubs, and is known for its bold, enormous blooms, which may sometimes be the size of a plate. 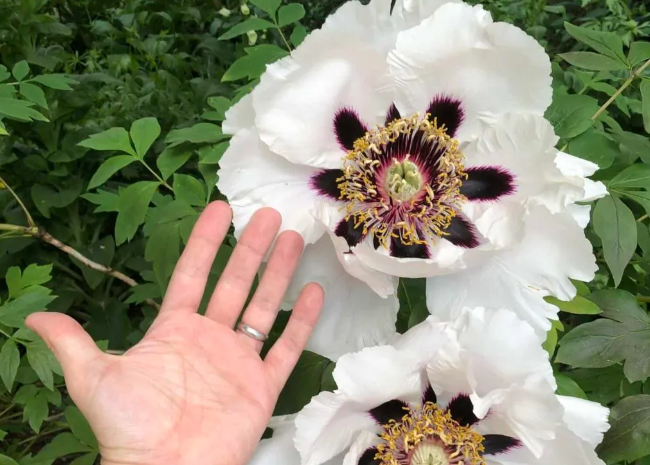 The tree peony, the larger sibling of the lovely common peony, is a radically different plant.
Some tree peony grow as high as 10 feet, making them woody bushes without any support.
Their flowers are larger and normally bloom about two weeks earlier than herby peonies, and they have a variety of shapes, hues, and scents.
They have both aesthetic and therapeutic uses in Chinese culture. 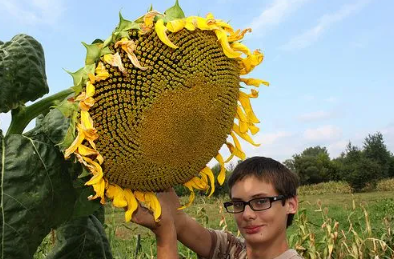 The majority of sunflower species are native to North and South America, although some are grown in farms for their amazing blossom sizes and edible seeds (to make sunflower oil or can directly be eaten roasted).
The sunflowers require at least 6 to 8 hours of direct sunlight each day, preferably more if you want to increase their potential growth.
It’s challenging to top the massive sunflowers’ profuse flowering.
The Russian variety releases flowers up to 14 inches in diameter and 9 to 12 feet high on imposing stalks.
Farmers often plant seeds in the spring and harvest the crop in the late summer.
Sunflower is the largest flower in the world if usability is taken into account. 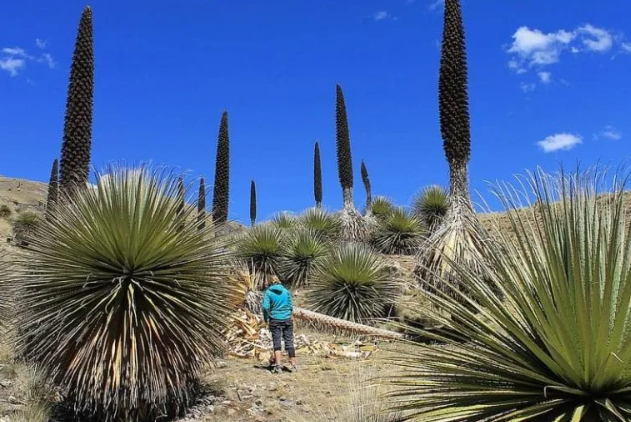 With a height of up to 15 m, Puya raimondii is the largest species of bromeliad and is also referred to as the queen of the Andes.
This kind of plant species can be found in the high Andean woods of Bolivia and Peru.
The flower, which may grow up to 30 feet (9.14 meters) tall, has 8–12 million seeds on each plant.
There are only three populations of the Queen of the Andes in the wild.
The bromeliad genus contains thousands of species, however, Puya raimondii has a lower genetic diversity.
Due to its incapacity to adapt to climate change and deforestation, Puya raimondii is currently in danger of going extinct. 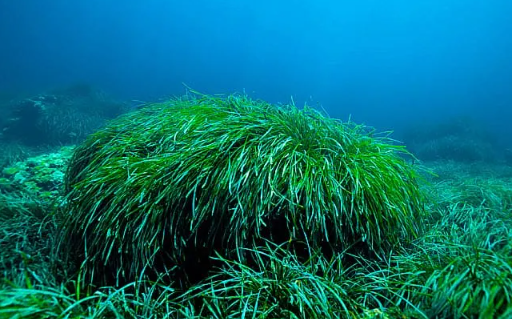 Scientists have dated the Posidonia Oceanica, often known as “Neptune grass,” and discovered that it is an approximately 200,000-year-old seaweed that covers ocean floors from Cyprus to Spain.
The plant produces sea olives as well as roots, twigs, leaves, and flowers. Algae and this should not be confused. It blooms in the fall.
The leaves are tape-shaped and range in size from 30 to 120 cm in length and width between 1 and 1 cm. This aquatic plant resembles a land plant in some ways and inhabits the Mediterranean Sea and specific regions south of Australia.
The fact that Neptune Grass oxidizes the waters and serves as a food source for several animal species is just one of the plant’s many advantages. 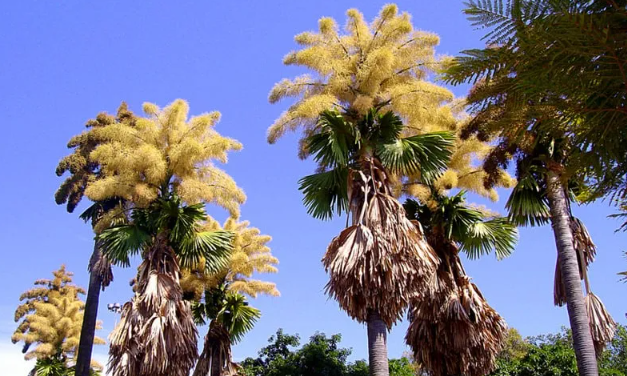 One of the biggest palm trees in the world, the talipot palm, is native to South India.
It can grow up to 25 meters tall and have stems that are up to 1.3 meters in diameter.
It is a palm fan with a petiole that can reach a height of 4 m, a diameter of up to 5 m, and about 130 leaflets.
On a branched trunk sewn on top of a trunk, the Talipot Palm bears one or more million tiny blooms, the longest inflorescence of any plant, measuring 6–8 m long.
The Talipot palms only flower once between the ages of 30 and 80 since they are monocarpic.
The Talipot Palm has numerous applications and is as practical in its native environment as the coconut. 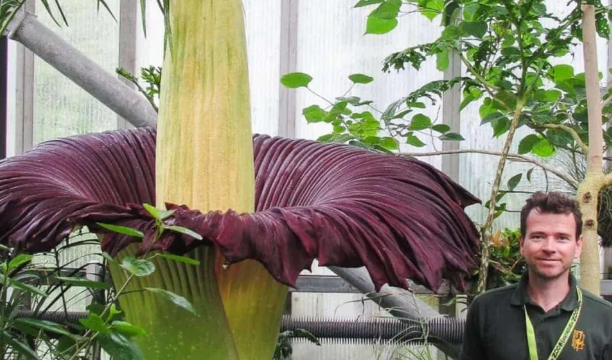 The blooming plant with the largest unbranched inflorescence in the entire world, the titan arum, also known as Amorphophallus titanum or death flower, only blooms infrequently and for a brief time.
It is not one of the best-smelling flowers because it emits a fragrance similar to a rotting corpse while it is in bloom.
The titan arum has a larger blossom because its fluorescence, which is not as large as that of the talipot palm, instead branches off.
The plant itself grows to a height of around 10 to 15 feet, and its leaves can be up to 13 feet long (4 m).
According to the Guinness Book of World Records, the corpse flower had a bloom that was 10 feet, 2.225 inches tall, making titan arum the largest plant ever recorded. 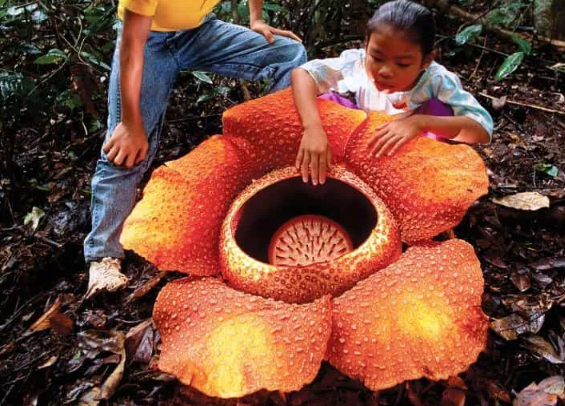 The largest flower in the world, measuring more than three feet in diameter, is the Rafflesia arnoldii. One of the biggest living things is the Rafflesia tuanmudae, often known as the Stinking Corpse Lily or Corpse Flower. This parasitic plant is stationary, without roots, stalks, twigs, or leaves, and is only apparent when it is about to blossom.

Without a trace of the contaminated host plant, buds grow over several months until they are the size of a cabbage. The bloom of corpse flowers also smells like rotting corpses (more intense than Titan arum).

The pollen attaches to the flies’ backs as they rest on the bloom, drawn to the smell of rotting meat even though they benefit nothing from the blossoms.

The fruit that it produces is fleshy, tiny, and filled with thousands of seeds.
Tree shrews eat these fruits and spread the seeds of the plant afterward (by excretion).
Rafflesia is a rare unisexual plant, thus there is little likelihood that flies will land on a female flower and transfer pollen to it for fertilization. However, they may land on a male bloom and transmit pollen from that flower.

One of the most endangered plant species in the world is the Rafflesia arnoldii. The International Union for the Conservation of Nature (IUCN) lists some Rafflesian species as “critically endangered,” including Rafflesia Magnifica.

The small geographic range of this species and deforestation are Rafflesia’s two main causes of these species’ extinction.