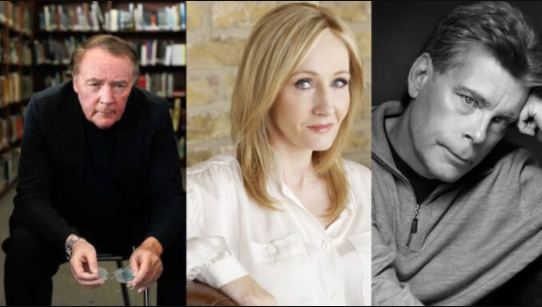 Highest Paid Authors in the World in 2023

Who would have ever thought writing can be a way of making millions of dollars. Really! A pen ad a book is all that are needed. Still seems to be quite amazing knowing that people have made millions by just simply writing. Certainly, only very few have been able to reach these prestigious feet of making millions of dollars writing. Probably you might be the next author who writes a bestselling book and make millions from it. Again, all that’s needed is a pen and book, sounds too easy right? Yea, I thought as much too.

In this post, we will be looking at the top 10 richest authors in the world 2023. I’m sure you must be wondering who some of these individuals are. Definitely, they are. not the most popular set of individuals on earth but surely most of their works are quite popular to earn them millions of dollars. Of course, one famous author we all be thinking of is Jk Rowling of the famous Harry Potter. But will she take the number one spot as the richest author in the world? Or there is a book with more success than Harry Potter whose writer we don’t know? All this and much more will be revealed as you read through the post.

These are the richest best-selling authors in the world in 2023;

10th our list is Dan Brown, an American author famous for his engrossing novels that infuse themes of art, cryptography, and conspiracies. With over 200 million copies of his books worldwide, many of Dan’s novels have been quite controversial, mostly the ones he features Robert Langdon, due to the religious perspective they portray. Dan Brown is among the richest authors in the world in 2023.

Dan grew in fame after his evergreen novel “The Da Vinci Code”. In 2006 a movie was subsequently made from the novel featuring Tom Hanks. “Angels and Demons” and “Digital Fortress”, are other famous books by Dan which brought him more fortune.

9th on the list is another American author Dean Koontz. Well known for writing suspenseful thrilly novels. Dean’s works are based in Orange County and combine themes such as horror, satire, mystery, and science fiction. To date, Dean has published 105 novels, translated into 38 languages. Some of Dean’s great works include “Demon Seed”, “Watchers”, “The Face of Fear” and “Lightning.” Dean published another bestseller in 2020 called “Elsewhere”. Dean iis also among the richest authors in the world in 2023.

Jeffrey Archer is known to be one of the best English novelists was born in 1940. Know to be a former politician. Jeffrey graduated from the University of Oxford and immediately began politics, but had to resign after a financial scandal. Subsequently, Jeffrey published his first novel, “Not a Penny More” where he made a lot of money to pay back his debt.

Archer is among the richest authors in the world in 2023. After a successful debut novel, Jeffrey went on to write other bestsellers, including “Prison Diaries”, “Nothing Ventured” and a host of many others which made him a fortune.

7th on our list is John Grisham, whose works are mainly on crime thrillers and his best works include “A Time to Kill”, “The Firm” and “The Pelican Brief”, Graduating from the University of Missouri, John studied law and in 1984 he was appointed in the House of Representatives. His novels are hugely inspired by his legal and political background, with his works based in Southern America. John Grisham is among the richest authors in the world in 2023.

Danielle Steel has written bestselling books for four-decades now and has sold over 800 million copies of her works worldwide. Steel dreamed of being a nun as a child but eventually went into writing. After publishing her first work “Going Home”, in 1973, Steel went on to publish over 90 novels, with romance as her main genre, and has been named the bestselling author alive by Guinness Book of Records.

5th on our list is Nora Roberts, author of more than 215 bestselling novels. Born in 1950, Nora writes mainly about the romance genre. Known to be the first author to be inducted into the Romance Writers of America Hall of Fame, with her works selling over 500 million copies in more than 12 languages. Roberts is an author among the richest authors in the world in 2023 who made sure she published at least a book a year in her entire writing career with her biggest works including “Naked in Death”, “The Witness” and “Vision in White”.

4th on the list is one of the most proficient living authors, Stephen King is undoubtedly the king of horror novels and has a massive estimated Net worth 2023 of $400 million. Known to have published 58 novels, alongside six non-fiction books, with over 350 million copies. Some of his best works include “Carrie”, “The Shining”, “It”, and “Shawshank Redemption.” Most of his books becoming a box office hit after being made into movies.

3rd on the list is Paulo Coelho, a Brazilian author who is best known for his novel “The Alchemist”, with over 65 million copies sold in more than 12 languages. Born in Rio de Janeiro became a writer at 39, after trying out many other professions. Coelho has written 26 books and was subsequently jailed for his political views. Paulo is definitely one of the richest authors in the world in 2023.

Known as the king of thrillers, James Patterson is the author of the thrilling series which features psychologist Alex Cross. Given birth in New York in 1947, some of his bestsellers include “Spider”, “Mary, Mary”, and “Cross My Heart. A writer of multiple genres, James novels are known to be page-turners.

The richest author in the world in 2023 with a massive Net worth of $1.06 Billion is J.K Rowling. Currently known to be the richest author in the world, mostly due to writing the evergreen novel Harry Potter. Rowling came up with the idea of a wizardry school when she was caught on a delayed train between Manchester and London. “Harry Potter and the Philosopher’s Stone” was published in 1997 despite being rejected by a host of publishers. After a year the book became a bestseller. With the success of the novel comes the box office movie Harry Potter which made Daniel Radcliffe and Emma Watson into stars. Rowling has since then published many bestseller novels for adults.

Top 10 best Countries to Study and Work Abroad in 2022